Hexis, a kindle for visually impaired students soon to be available in schools by end 2019 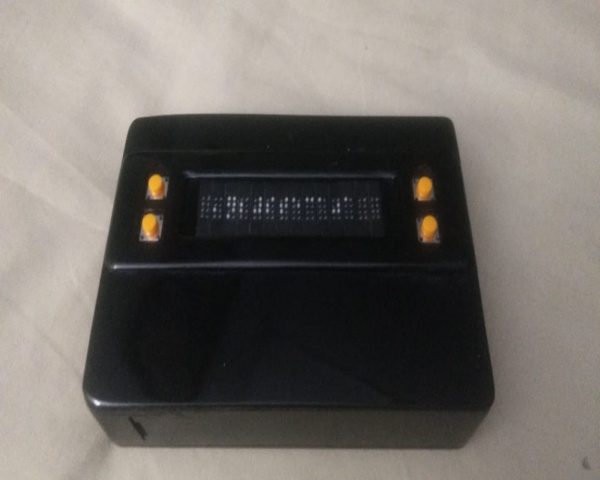 Among the assistive technologies on display at the Empower conference currently on in Sonepat is an e reader for visually impaired students. Called Hexis, this kindle for blind and low vision students is likely to be made available across many schools in India by the end of this year.

A kindle for blind and low vision students that does not burn a hole in the pocket. Sounds incredible? That’s exactly what Hexis, a refreshable Braille reader (RBR), more easily understood as a kindle for visually impaired students, promises to offer.

Hexis is one of the assistive technology products on display at the three-day Empower conference at Sonepat organised by the Indian Institute of Technology, Delhi (IIT-D) and Microsoft India.

How it all started

The brain behind Hexis is inventor Paul D’Souza, founder of Touchetech Labs, who thought of developing a kindle for visually impaired children 10 years ago. The inspiration, he says, came from Leonardo Di Caprio-starrer hit film Titanic. “I was inspired after listening to the hymn that plays when the Titanic is sinking and wanted to make a machine where the dots come out of the page so that the blind can read music. Research also showed that while they are available, they are expensive and unaffordable to the masses”.

Paul made a prototype of the device but found few takers. He finally won a grant to make a working device and over the next 10 years went on to make 10 prototypes of the product, all different from each other. These machines take digital information and convert them into a pattern of dots so that a visually impaired person can read in real time.

The Karnataka government selected his company, Touchetech Labs, under the Elevate 100 scheme and gave a start up grant. “This took care of the bulk of our initial R&D efforts”, he says.

Vision Empower (VE), which is a trust incubated out of the International Institute of Information Technology, Bengaluru (IIIT-B) wanted to collaborate and make affordable devices and take them to schools. They want to make it affordable for schools because most children cannot afford these devices. Hexis will make the text of books accessible to visually impaired children. – Paul D’Souza, Founder, ToucheTech Labs

There are many kinds of Braille technology available in Indian markets for adults. These are expensive or need Internet connectivity, which puts it out of reach for most. Hexis has been tested among some students to a great response, says the VE team.

“The feedback from the children is encouraging”, says Supriya Dey, Co-Founder, Vision Empower. “This is something new for them and they are most excited about being able to access storybooks. The users we have tested them with have never seen a refreshable Braille display before so the real test will be when we take it to schools where visually impaired children who are used to such devices use Hexis”.

What sets Hexis apart from other devices is the cost factor. “Most of the devices that are available cannot be afforded by parents or the schools/institutions and we want to create something they can afford”, adds Supriya. “That was the most important driving factor”.

The IIIT-B team is working on the prototype to bring the cost down to less than ₹ 20,000, which is much lower than the price of Braille readers currently available in the market. Hexis, which will come pre-loaded with textbooks, stories and graphics, opening a new world for visually impaired students in India.