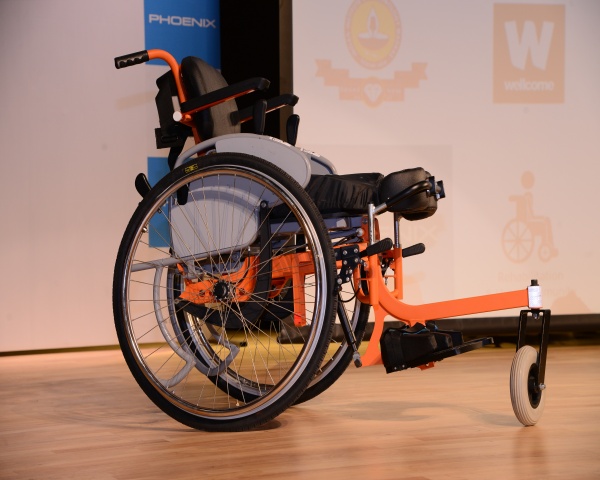 A standing wheelchair that allows the user to shift positions independently and in a controlled manner. That’s what Arise designed by the Indian Institute of Technology Madras promises.

Arise has been launched in India with the support of United Kingdom-based foundation Wellcome and is all set for commercial production in collaboration with Phoenix Medical Systems.

The Standing Wheelchair was launched at the IIT Madras Research Park in the presence of Thaawarchand Gehlot, Union Minister for Social Justice and Empowerment.

Arise was designed developed by the TTK Center for Rehabilitation Research and Device Development (R2D2) at IIT Madras. Since 2015 the R2D2 has been involved in research related to human movement, influence of orthotic and prosthetic devices on human movement, and the design and development of mechanisms, products and assistive devices for people with disabilities.
The commercialisation of the Standing Wheelchair technology was made possible with the support of Wellcome, which brought together the research and manufacturing partners. What’s even better is that thanks to a novel mass-manufacturable mechanical design, Arise will be made available at affordable prices.

In the last five years, I have seen a lot of modern technologies in India and abroad but Have not seen such a good standing wheelchair anywhere in the world. I am very happy and impressed and I congratulate IIT Madras and its partners for coming up with such a nice wheelchair, which is multipurpose and beneficial for health also, besides being cost-effective. – Thaawarchand Gehlot, Union Minister for Social Justice and Empowerment

Users of conventional wheelchairs face many difficulties. Being seated for long periods can lead to secondary health problems such as poor blood circulation and pressure sores. They need considerable effort, aids and assistance to stand and this makes them avoid doing so as frequently as they need to or wish to.

This is where standing wheelchairs can play a critical role as users can arise from the seated position to a standing position by themselves and vice versa.

Praising the work done by R2D2, Professor Bhaskar Ramamurthi, Director, IIT Madras said, “The Centre and Phoenix Medical Systems are to be congratulated for their persistent efforts to make the device user-friendly and affordable.”

Arise was designed in three stages. In the first stage, a hand-operated, linkage-based mechanism was developed to achieve the standing functionality. A proof-of-concept prototype was used to validate the functioning of the standing mechanism. Arise was designed such that the user can propel it independently and in a controlled manner by using their arms. The effort required is no more than that required to propel the wheelchair. A gas-spring helps reduce the effort required by the user.

“We are delighted to have been able to support this new, affordable and accessible innovation, which will be crucial to improving the lives of wheelchair users across India”, said Philip Jordan, Partner, Wellcome Innovations Team. “The standing wheelchairs can help reduce the health problems associated with sitting wheelchairs. They can also empower users to be more independent in daily life, opening more opportunities and improving mental health.”

Highlighting the safety features of Arise, Sashi Kumar, Managing Director, Phoenix Medical Systems, said the interlocking mechanism ensures that the wheelchair remains in a locked state if the knee block is not in position. “The dimensions of
Arise were made adjustable and adequate safety features were incorporated.”

Testing partners include NGOs, hospitals, rehabilitation centres, individuals who provided inputs. Rigorous mechanical testing ensured that the device would be rugged and of high quality.

“A one-time custom-fitting of Arise is necessary to provide maximum benefit to the user”, said Professor Sujatha Srinivasan, Founder-Head, R2D2.”To maximise impact of our devices, R2D2 will work to create awareness about their suitability, availability, and necessary fitting and training”.

At the end of the third stage, Arise was tested by more than 50 people with spinal injuries. Their feedback was positive with a couple of them pointing out that they were able to stand independently after three years, thanks to Arise. Another person said that, with Arise, he found it easier to stand compared with using callipers. Arise was found to be stable even in outdoor use in rural areas, on uneven terrain.