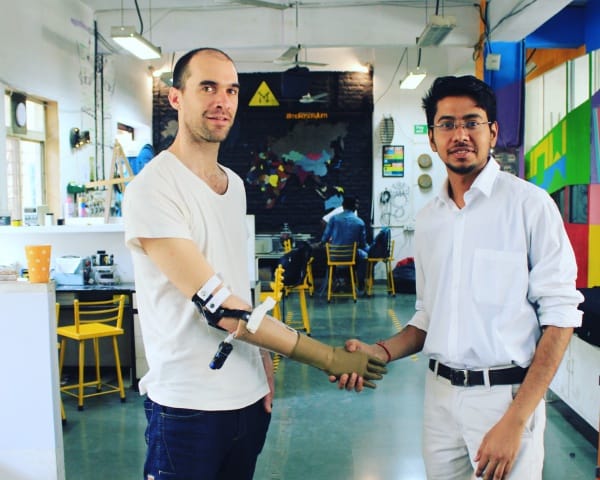 In our profiles on the winners of the Universal Design Awards 2019, we focus on Prashant Gade, a young innovator, who has developed a low cost prosthetic arm that is changing the lives of upper limb amputees.

Moved by an encounter with a child with no upper arms, innovator Prashant Gade quit his job and education and devoted himself to developing a low cost prosthetic arm that would enable upper limb amputees to go about their daily tasks easily and independently.

Prashant’s single-minded pursuit over three years led to Inali Arm, an affordable prosthetic arm. There were many challenges, including on the personal front, as his family stopped talking to him as they were unhappy with his decision. Prashant was not deterred and today thanks to this young man’s determination, there are over 1,000 people whose lives have changed, making him a truly deserving winner of the NCPEDP MPHASIS Universal Design Award 2019.

Prashant has won the award in the Working professionals category, which recognises people who work for the cause of accessibility and Universal Design in areas like built environment, transport infrastructure, service provision, information and communication technology (ICT), universally designed consumer products, mobility & independent living aids, or assistive technology.

The idea came about when I met this seven-year-old called Shreya who was missing both arms from birth and I wanted to help her out by gifting her a prosthetic arm. A company I contacted for this quoted a price of Rs 24 lakh and I was shocked because most people cannot afford this. – Prashant Gade, Developer, Inali Arm

Every year in India over 40,000 people lose their arms and over 85% are living without a solution. No wonder given the cost factor. Which makes Inali Arm a game changer.

“I started working on Inali Arm in 2015 and created nearly eight design iterations”, says Prashant.”The final design works with the brain signals so that whenever a patient thinks about moving his muscles, the brain sends a signal that are captured by the sensors and processed. That’s how the hand works”.

Coming up with a solution that was affordable took nearly two years as Prashant had to design circuits to keep costs low. There were setbacks as he did not have the machines. Then, a miracle happened. “I designed a few hands and fitted them to some patients and put the videos on YouTube and they got noticed by a professor in the United States who invited me for a conference there. Some people gifted me 10 machines for free and I could make more hands and give them to people”, recalls Prashant.

Inali Arm is available in the market but Prashant wants to reach out to upper limb amputees in rural areas. Every month the Inali Foundation team travels to parts of rural India where they organise camps where the electronic arms are distributed for free to people in need. Until, now over 1,000 arms have been given. Now the team is looking for support from the public to reach out to 500 people with free prosthetic arms.

Users of Inali Arm say it is comfortable and easy to wear. “The prosthetic arms that are available in the market are very heavy and weigh the arm down, making prolonged use difficult. Inali Arm, on the other hand, is comfortable and light”, says Jitendra Singh on Vadodara.

Going ahead, Prashant plans to focus on affordable healthcare products. “In 2015, when I started off I was all alone. Now I have a team of people from the medical sector, industry and universities so I am hopeful of getting there”.

PROFILES OF OTHER WINNERS: