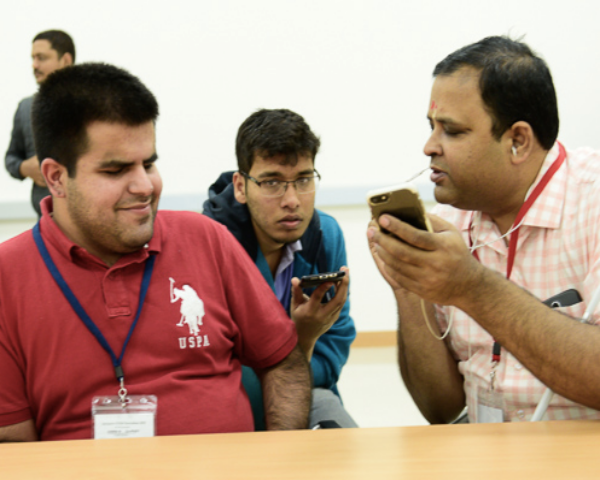 Education and career prospects in science, technology, engineering and mathematics (STEM) are elusive for many blind and low vision people in India. The Inclusive Stem is out to change that. Read more about the young people behind this much needed initiative.

A member of the risk analytics team at NBFC Clips Capital, 22-year-old Shakul Raj Sonkar uses artificial intelligence (AI) in his work. The 22-year-old loves data sciences and being part of an emerging field globally is very exciting.

And to think that Shakul was not encouraged to study the sciences in school. When he shifted from a blind school to a mainstream one in class 8, he was told to opt for Humanities. “I had to shift as blind schools do not offer the option of studying math but no school in Kanpur would enrol me in science either because of my disability. I had to shift towns”. Even in the new school, he faced issue as books and diagrams were inaccessible.

The core I-Stem team is made up of people with a mix of backgrounds. These include engineering students, alumni working in the tech industry, and professionals in the disability space. Members devote their weekends and spare time after school/office to the foundation.

We started this as an advocacy group, and we aim to mentor students from class 8 onwards by connecting them to what is best suited to help them. We are also developing a portal called the Universal University Portal which will be in partnership with seven universities. – Shakul Raj Sonar, Co-Founder, I-Stem

“All these universities will have access to our materials like modules of teacher training programmes, accessibility and all disability-related guidelines”, says Shakul. The goal is to save blind and low vision students the stress and barriers I-Stem members have encountered. So far, the organisation has held two inclusive hackathons in 2018 and 2019 which saw the presence of companies like Microsoft and Deutsche Bank.

The target group ranges kids to adults and if required I-Stem is willing to train college teachers. The eventual aim is to expand this outreach to people of all disabilities.

“There are two aspects to this”, says co-founder Kartik Sawhney, a software engineer at Microsoft based in the United States. “One, is the attitudinal barriers that people with disabilities face. Sensitisation has been problematic in India and while the progress in technology is better, its still very okay”. The bigger problem, he believes is the mindset. “People just discourage you so much that visually impaired people don’t even try. This is what I-Stem is trying to solve”.

Some of the challenges the foundation is looking at are helping universities understand their disabled students’ needs and making companies aware that visually impaired people can be in executive roles as data scientists.

“When it comes to employability, corporates are more open now”, says Kartik. “The issue is that because visually impaired students are not learning math after class 8, the curriculum set-up, and lack of support in universities, people not developing hard skills, so there are not having enough qualified students available”.

Among the projects the team is working on is to develop a joint tech framework with the Xavier’s Resource Centre for the Visually Challenged (XRCVC) in Mumbai that can automate the services universities have to offer to students with disabilities.

To bring about a change in attitude within the community is the most crucial and here I-Stem is reaching out to NGOs says co-founder Akashdeep Bansal, whose area of focus is making STEM e-books accessible.

“A lot of NGOs are unaware that visually impaired people can pursue STEM and demotivate them. That’s a major challenge.Initially we focused on uplifting students in classes 11 and 12 or engineering so we can show them to NGOs as examples of people with successful STEM careers”.