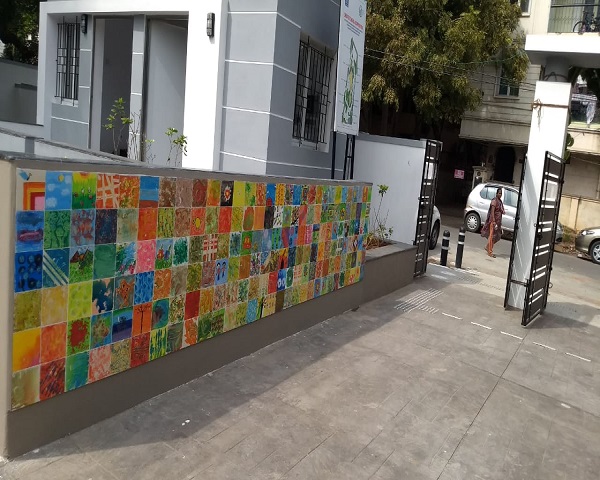 Infinity Park, Chennai’s largest disabled-friendly children’s park was recognised by the Tamil Nadu government at the Independence Day awards in Chennai. From therapeutic walkways with different textures to a raised sand pit for wheelchair users, Chennai’s largest inclusive park has much to offer.

A huge honour for the team behind Infinty Park, with the government of Tamil Nadu honouring it with the Independence Day awards held in Chennai on Thursday. Built by the Greater Chennai Corporation (GCC) under the Smart Cities project, the park was opened to the public last December.

Located at San Thome over a sprawling area of 15,000 square feet this is also the first park in Chennai to come up on an open ground. The news of the award was received with much cheer by groups involved in the project, who hope to see a larger movement across India towards inclusive playgrounds and parks.

We are happy that an effort that brought together so many people and stakeholders towards building inclusion has been recognised. It is great that the government is finally taking this on as their task and responsibility. That’s the best thing that can happen. – Kavitha Krishnamurthy, Founder, Kilikili

The news of the award comes just days after another municipal corporation, the Municipal Corporation of Greater Mumbai (MCGM) posted a newspaper notice asking for citizen inputs to frame its policy for gardens that can be accessible, inclusive and sustainable. This shows that the San Thome park has paved the way for a larger change in mindset across India.

With several touches taking into account needs of people across diverse age groups, Infinity sets a model for others. There are three zones – for 0 to eight years, children above eight years of age and for adults. There is even an herb garden that is accessible, says Jayashree Kamalan of CityWorks.

“There is a basketball court with two hoops so people in wheelchairs can play the game too”, says Kamalan. “We also have an elevated sand pit for them because typically people in wheelchairs don’t get to play in the sand, so this is at table height. The floor has tactile tiles so blind and low vision people can access it”.

There are Braille signboards, wheelchair-friendly toilets, and in the future, a light and sound show. For children who feel overwhelmed by too much noise, like those with autism, there are quiet corners as well as a sheltered space.

The best news is that municipal authorities plan to build such parks in more areas. “It was such a great experience working with the civic authorities”, says Kavitha, who has helped design such parks in many other cities. “We found the contractor and mid-level officials very committed to the idea. This was not just a project they had to implement”.

What makes this park so unique is that it has something for people in every age group, which is not the case with other inclusive parks, which mainly reach out to kids below the age of 10 years. Anuradha Srinivasan who has a 17-year-old son with autism. “It is wonderful to see the facilities there. This is much needed and I am thrilled. It makes children and parents feel accepted and included. I hope they maintain it like this”.

This is India’s eighth inclusive park, and hopefully a benchmark for what is to come.