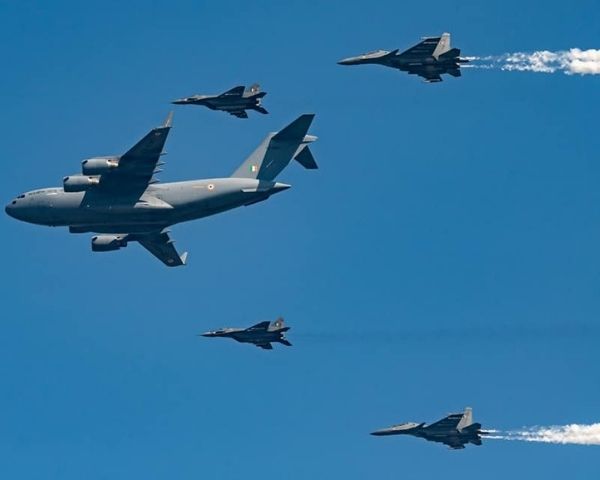 Indian Air Force (IAF) celebrated its 88th anniversary on Thursday. In a grand ceremony held at the Air Force Station at Hindon in New Delhi, there was a display of fighter jets. A parade was also held by officials of the IAF. For this year’s celebration, the highlight was French-made Rafale jets that were brought in last month. The show of prowess atop the air force station was indeed a sight to behold.

On Air Force Day, we proudly honour our air warriors, veterans, and families of the Indian Air Force. The nation remains indebted to the contribution of the IAF in securing our skies and assisting civil authorities in Humanitarian Assistance and Disaster Relief- Ramnath Kovind, President of India.

Amongst those who wished the IAF included Prime Minister Narendra Modi. He tweeted in Hindi congratulating all the brave warriors. “You not only keep the skies of the country safe but also play a leading role in the service of humanity in times of disaster. Your courage, valour and dedication to protect Bharat inspire everyone”, he added.

“I am confident that the IAF will always guard the Nation’s skies, come what may. Here’s wishing you blue skies and happy landings always. The Nation is proud of its men and women in blue and salutes the prowess of the IAF as it stands ready to face challenges and deter adversaries. We remain committed to enhancement of IAF’s combat capability through modernisation and indigenization”, tweeted Rajnath Singh, defence minister of India.

At the Hindon air force station where the parade was held, there were strict security measures in place following all Covid protocols. IAF chief Air Chief Marshal Rakesh Kumar Singh Bhadauria assured that the nation is secure in the hands of IAF.

IAF was formed in the year 1932 to support Royal Air Force of the United Kingdom. After World War II, IAF came to be known as Royal Indian Air Force. Though it started off with a meagre number of people, IAF is today the world’s fourth largest.