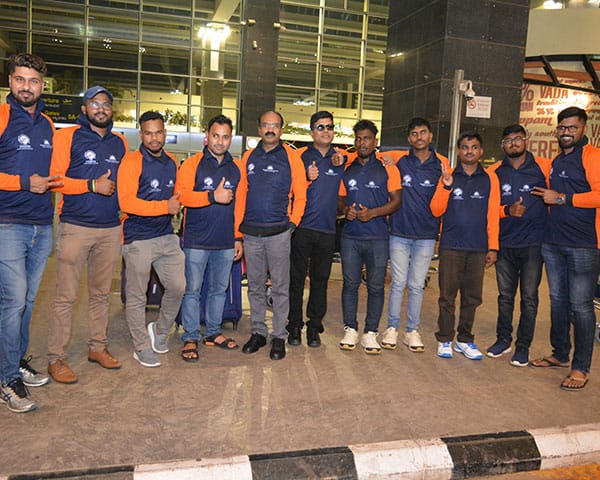 The Indian Blind Cricket Team has won the one day international and T-20 championships at Jamaica, defeating the hosts. The young team is riding high on confidence and is hopeful of bringing home more laurels.

The Indian Blind Cricket team has brought home yet another trophy, and this time it is from Jamaica. India beat Jamaica, 3-0 in the one day international(ODI) series at their home ground. In all, the teams played three ODIs and two T-20 matches.

In the final ODI at Kingston, match, India beat Jamaica by nine wickets. Jamaica won the toss and elected to bat. Deepak Malik struck in the second over of the match removing Gregory Stewart for three runs. From there on the hosts could never get a partnership together as they were bowled out for only 105 in 23 overs. Deepak picked up two wickets, while Ajay Reddy picked up three wickets.

Ajay Kumar Reddy, Captain of the Indian team says that the team is now riding high on confidence.

We had dominated the entire series. Our team is working hard and pushing themselves to do better, and eventually reach mainstream cricket. Our efforts can be seen in all our matches as well. Our next tournament is not finalised yet. But we are aiming for the T-20 world cup series in England. We are confident of winning that too. Cricket is a passion to all of us. – Ajay Kumar Reddy, Captain, Indian Blind Cricket Team.

Chasing a small total India lost Pankaj Bhue in the very first over. But Venkateswara Rao got an astounding 84 runs of just 51 balls as India chased down the target in just 9.4 overs. He became the man of the match. With this win India head into the final game of the tour. The team is now gearing up to face more matches.

Shekhar Naik, former vice-captain of the blind cricket team, is all praise for the performance.

“I want to say congratulations to the Indian team for playing such a remarkable game. I also appreciate the Jamaican team for putting up a good show. I feel there is much to learn for the Jamaican team from these youngsters. This is also a great initiative by the Cricket Association of Blind for India. Every year they organise some international matches and it is a great platform for our youngsters. This is also a great way to make blind cricket popular”, says Shekhar.

Recently, an image of the Indian Blind Cricket team sharing the signatory salute pose with West Indies cricket legend Sheldon Cottrell had gone viral on social media. Even Cottrell tweeted the image and wished the team good luck. The Indian team is back home already.

ALSO READ: With no official support or funding, Maharashtra’s wheelchair cricket struggles to spread its wings