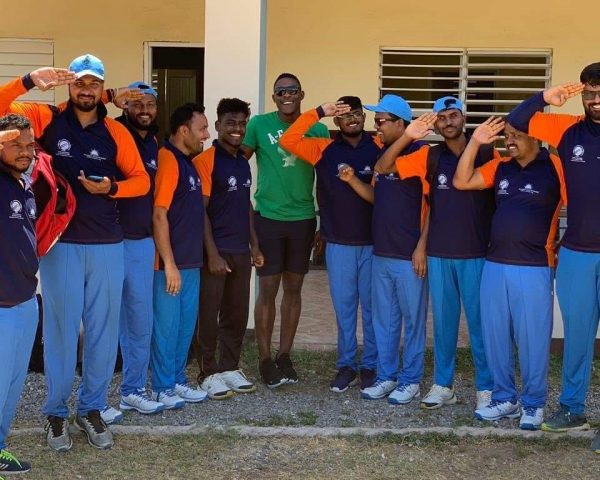 The Indian Blind Cricket Team is in Jamaica for a series of T20 and one day international matches. The team got a chance to meet legendary West Indies cricketer Sheldon Shane Cottrell. Images of that meeting are going viral on social media.

Sheldon Shane Cottrell needs no introduction to cricket fans from across the globe. One of the most renowned players of the game, this West Indian cricketer has spun magic on the field and won fans around the world.

A left-arm fast-medium bowler, Cottrell met with players of the Indian Blind Cricket Team, currently at Jamaica to play ODI’s and T20 international series. For the Indian players, it was a dream come true.The team was thrilled to pose for pictures Cottrell and his signatory salute.

Cottrell was excited too and shares his happiness on Twitter.

The Indian Blind Cricket team have made a historic visit to Jamaica – I met them at my work place – my army base Up Camp Park. #salute to these men and their achievements. Some pics of the world champion Indian Blind Cricket team members and me. The guys will play a t20 game tomorrow and follow that up the next day with an ODI against the Jamaican team. – Sheldon Cottrell, Former West Indies cricketer

Cottrell’s fans were clean bowled by his visit to meet the Indian blind cricket team and the veteran was flooded with much love on social media.

Indian players were excited too. Ajay Kumar Reddy, Captain of the Indian side said meeting such an iconic player was something he never quite expected would happen. Ajay says the team was practising at the army ground when they found out that Cottrell was around. Cottrell works for the army in Jamaica.

“In India, it is hard to even meet a Ranji cricket player”, says Ajay. “You need to fix appointments and wait for many days. But cricketers at this part of the world are very easy and simple. Cottrell approached us and said that he wants to click a photo and we were more than happy. He is a simple man, and we will cherish this meeting for the rest of our lives”.

All the team members agree that wise words and positivity from Cotterell was indeed a much needed energy booster for the blind cricket world champions.

The series in Jamaica will end on 28 July and the Indian players have had a successful series so far, winning most of their matches. They are likely to come back home with the Cup.