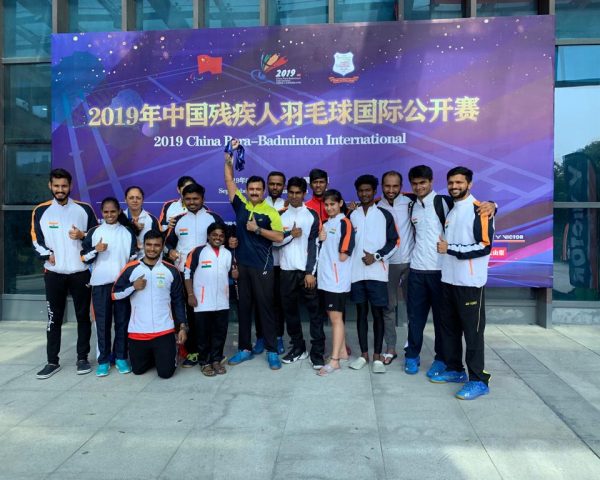 Another feather in the cap of Indian para badminton. India put up a good show at the China Para Badminton International held at Hangzhou in China winning six medals.

Forced to pull out of the Thailand Para Badminton International Tournament last week after an injury, India’s star para badminton player and world number 1 Pramod Bhagat has made a comeback and how!

In all, Team India won six medals in the tournament.

I am really so very happy. After my injury, I have managed to make a comeback and save my title. I still have some injury related issues but after my medal, the only thing I am feeling is happiness and relief. – Pramod Bhagat, Indian Para Badminton Champion

With this victory, Pramod has further cemented his spot for the Tokyo 2020 Paralympics, but Team India Coach Gaurav Khanna made it clear that the pressure to stay on top remains. “Pramod is world number 1 and is the top contender for the Paralympics as well, so his place is certain, but he should keep this momentum and maintain the pace”, said Khanna.

There are still some more tournaments to go for the players to gain qualifying points for the Paralympics. Up next is the Denmark Para Badminton International, 13-18 October, followed by the Japan Para Badminton International, 11-17 November. There are three events early 2020 as well. “All are Olympic events and points will be calculated for Tokyo 2020”, adds Khanna.
Time enough for some players who are yet to live up to their potential.

“We have more expectations from Suhas and Sukant Kadam but somehow missed the chance in China”, says Khanna”. While Suhas reached the finals in the Men’s Doubles, he along with Sukant had to remain content with bronze medals in the SL4 category. “They played well but somehow did not make it to the finals. There is nothing to despair through. We have learned our lesson and will work harder and certainly make a comeback’, said Khanna striking an upbeat note.