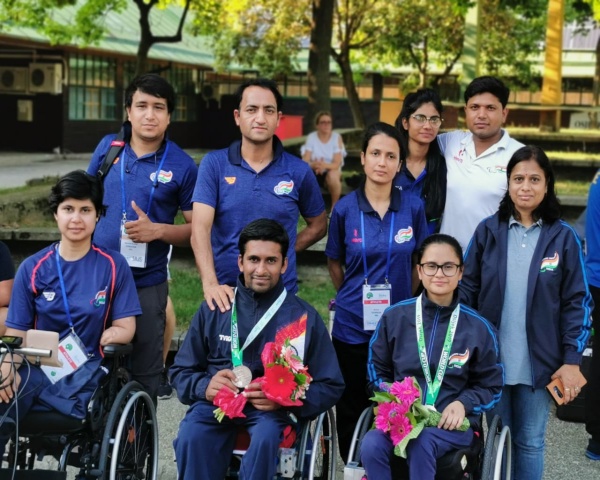 In a major setback to India’s para shooters, the National Rifle Association of India (NRAI) has removed all para athletes from all its programme in all competitions. The move, comes just ahead of the national championships at the end of the year and could seriously hamper India’s chances in the 2020 Paralympics

“The para matches are deleted from the programme of all shooting competitions. This was decided by the Governing Body. as there is a separate organization which controls shooting activities including selection of teams for Para World Cups/para World Championship/Para Olympic Games”

This abrupt announcement of the National Rifle Association of India (NRAI) has shattered the morale of India’s para shooters, flush with their successes at the recent Osijek 2019 World Shooting Para Sport World Cup, where they set four world records.

At a meeting in New Delhi, the governing body of the NRAI decided to remove para athletes from its curriculum on the grounds that there is a separate body – Paralympic Committee of India (PCI), which controls shooting activities.

However, the NRAI controls shooting activities in India, including the procurement of equipment and ammunition, and has been supporting para shooters for the last 23 years. Which makes the decision to change the arrangement with no advance notice arbitrary and unfair.

It’s been a give and take equation between PCI and NRAI. They have been given important powers like importing license permits and we have been offering support to them in medical classification tests and by sending personnel to assist during events. It’s fine to say that the PCI should manage but the timing is bad. The national championships are at the end of the year and we have the Paralympics nest year. – J.P Nautiyal, Chairperson, Para Shooting, Paralympic Committee of India

From seven para shooters three years ago, the strength of India’s para shooting team has grown tremendously. There are now over 400 para shooters across India with 200 performing at international events with impressive performances to their credit. India has already won four quota places in the Paralympics with the world records and could win even more, making them strong contenders at the 2020 Tokyo Paralympics.

Now, they face an uncertain future as many of them rely on the championships hosted by the NRAI at state levels.

Speaking to NewzHook, Rajiv Bhatia, Secretary, NRAI said the decision was motivated by many reasons.

“Most of the ranges are not disabled persons user friendly. For example, the 10M range at Trivandrum is on first floor and there is no provision of ramp or lift in this range. There’s lack of technical expertise as NRAI officials are not well versed with para shooting rules. There is a separate license required for para shooting which is issued by international body of para shooting. NRAI is not affiliated with them hence it can’t ask them to conduct courses in India”. He added that NRAI officials are unfamiliar with the many categories in para shooting and nor is there is a doctor in India who is certified by the International Para Shooting Association to approve of these categories. “The NRAI is also not aware how the teams are selected for international competitions.”

The fact that the facilities are still inaccessible despite being mandated under the Rights of Persons with Disabilities Act, 2016, is a violation of all government regulations, says Nautiyal. Besides why take such a step at such a critical juncture, ahead of crucial events?

The reaction from para shooters indicates their sense of dismay and despair. None of them wanted to be quoted for fear of reprisal.

“The NRAI decision is very shocking and demoralising”, said one shooter from Gujarat to NewzHook. “This comes just before the zonal championship, selection trials and the national championship”. Another para shooter from Chandigarh said, “I was practicing shooting like anything having dreams of medals for the country….. now this unmindful decision of NRAI has deviated my mind and out of focus leaving me half hearted”.

Nautiyal says the PCI will stands by the para shooters. “It will be tough to organise equipment and ammunition because the government has given rights to the NRAI alone. This means only para shooters with access to their own ammunition can take part, but we are determined to conduct the championship and we have a team more than capable of doing so”.