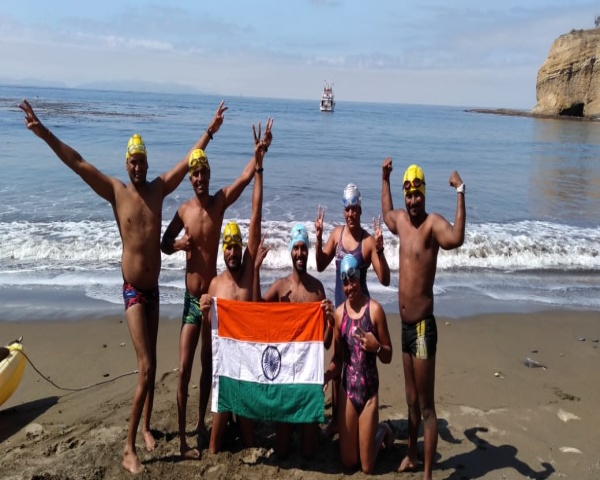 A team of six Indian para swimmers have been successful in swimming the Catalina Channel, considered among the most dangerous stretches in the world. They have also set a record in doing this. Read on.

Cold winds, icy waters, sharks and jellyfish notorious for their paralysing sting – the Catalina Channel, between the Santa Catalina Island and Los Angeles in California, United States, is regarded as one of the world’s seven most dangerous open water swims, for good reason. The 35-km distance and strong currents have defeated the most seasoned of swimmers.

A team of six para swimmers from India successfully swam the Catalina Channel early Tuesday morning. Their target time was 12 hours but they completed it in 11 hours 34 minutes, setting a record in Asia.

An exhausted but happy Satendra Singh spoke to NewzHook shortly after completing the swim.

We are so happy to have finished it in less than the time we set for ourselves. This was a hard swim as the waters were icy. It was also quite scary as we were swimming at night to avoid the sharks. We saw many dolphins which swam with us. There was the worry of being stung by jellyfish but we were determined to complete the swim and have been successful. – Satendra Singh, Para swimming champion

There were some anxious moments as well. “Jagdish and Anjani were struggling towards the end mainly because of the cold waters. The complete darkness made it hard too”, says coach Rohan More, who started training with them last year. “But they did not give up”.

The Catalina Channel swim is part of the Ocean Seven Swimming Challenge, a swimming marathon of seven channel swims. It is considered to be on par with the Seven Summits mountaineering challenge.

The Ocean Seven challenges a swimmer to complete swimming across the world’s most difficult seas. These are the English Channel between England and France, Catalina Channel (Catalina Island to the California mainland), Strait of Gibraltar (Spain to Morocco), North Channel (Ireland to Scotland), Kaiwi Channel (between Molokai and Oahu), Cook Strait (North and South Island of New Zealand) and Tsugaru Strait (Honshu and Hokkaido) in Japan.

The six para swimmers successfully swam across the English Channel last year and with this they have five more to go. They will come back home, rest and then plan the next swim.

Their success is a matter of great pride for P Narhari, Commissioner-cum-Secretary, Urban Administration, Government of Madhya Pradesh, who Satendra looks up to as a mentor.

“I know Satendra for almost even years. I was the Collector of Gwalior when he came to me and said he wanted to do something big with his life” recalls Mr Narhari. When Satendra reached out for support in his swimming mission, Mr Narhari did not hesitate to back him. This helped the swimmers draw support from the TATA Trusts, the Madhya Pradesh government and other organisations.

The full credit, Mr Narhari, is clear, goes to Satendra. “I give credit to his inner strength, grit and determination. That has paved the way and he has proved himself every time he was given an opportunity”. His success, he believes, is an inspiration to all. “What Satendra has done is great and inspiring for people with disabilities and common people from ordinary backgrounds. Goes to show that with support and the right attitude, everyone can achieve a lot”.