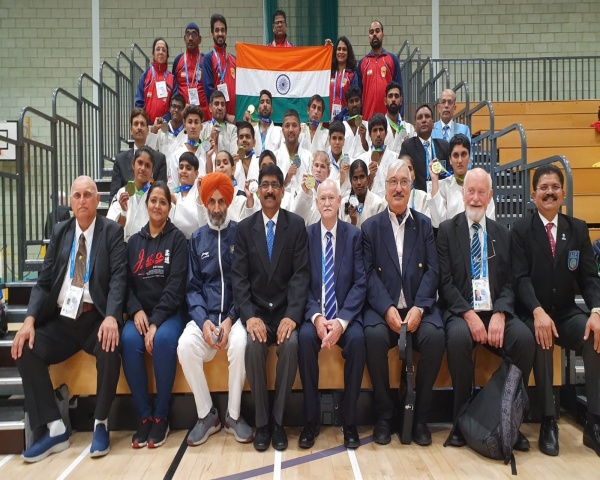 Visually impaired judokas of India made a clean sweep at the 16th edition of the Commonwealth Judo Championships held in the United Kingdom winning seven gold medals.

The Indian national anthem could be heard 19 times at the University of Wolverhampton Sports Centre in Walsall, United Kingdom, venue of the Commonwealth Judo Championships as India’s visually impaired judokas made a clean sweep walking away with seven gold, seven silver and five bronze medals.

Nineteen members of the 20- strong Indian contingent won medals at the event, making it a day to remember.

The names of the medal-winners in each category were as follows:

The other countries taking part in the event were England, Wales, Scotland and South Africa. Scotland, England and Wales also won gold medals, but India was far ahead of the rest. The performance has made the Indian Blind and Para Judo Association, which manages visually impaired judo in India since 2010, very proud.

We are very happy to have made a clean sweep at the Commonwealth Judo Championships. I really hope that the experience and exposure that the players have got will help them play better in the future. Also, the confidence that the team gets after a performance like this, is unparalleled. – Munawar Anzar, General Secretary, Indian Blind and Para Judo Association

Aaesha Munawar, Joint Secretary of the association, told NewzHook that given the challenges faced by people with disabilities in India, their success was truly remarkable. “Compared to the kind of support that non-disabled sportspersons get, para sports gets nothing”, said Munawar. “We have to beg and borrow for everything and when you cast a glance at the support other countries give, the contrast is glaring”.

Over the years the number of visually impaired judokas in India has grown. There are now about 700 visually impaired judokas playing at the national level, about 45% of them girls. The maximum participation is seen from the states of Tamil Nadu, Haryana and Uttar Pradesh.
Judo, says Munawar, gives them the opportunity to empower themselves, but convincing families and blind schools to send students for judo training is hard.

“We have girls as young as 10 taking part and its great to see that but the challenges are many. We want to make their parents proud and help the judokas improve their levels”. The association hopes to send a team to the Tokyo 2020 Paralympics and all efforts are currently geared towards that.