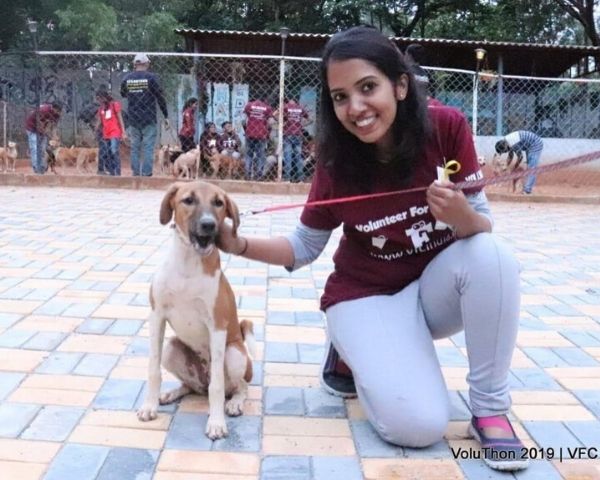 29-year-old Kumudini Ethiraj from Bengaluru was diagnosed with Inflammatory Bowl Disease (IBD) when she was twenty years old. Categorised as rare disease, people lack awareness about IBD in India. Hence, the struggles of those who go through it are not noticed by people around them or even the medical fraternity. Kumudini has joined hands with many others like her to spread the word about IBD. She is sure that in another ten years, there will be better awareness about the disease.

A rare disease is something that affects only a small percentage of the population. So most of the times, people are unaware and does not even notice it. Hence, the person who goes through it does not get help. It might take years for a diagnosis. Inflammatory Bowel Disease (IBD), also called as Crohn’s Disease or Ulcerative Colitis is one amongst them.

Today, we bring to you the journey of Kumudini Ethiraj, 29, from Bengaluru who was diagnosed with IBD a few years back. But Kumudini has not let this rare disease come in the way of helping more people like her. She plans to create more awareness about the disease across India in her own ways and also by being a part of the group ‘Crohn’s and Colitis Squad’.

What is ‘Inflammatory Bowel Disease’?

IBD is a chronic inflammatory bowel disease that can have a deep and negative impact on the lining of the digestive tract. This can cause severe abdominal pain, diarrhea, weight loss, malnutrition and even fatigue.

IBD has been classified as a rare disease, something that is not obvious or visible most of the times. In fact, the symptoms can go unnoticed in many people. This leads to the individual not being diagnosed with the disease. It can cause various health problems later on in life as well.

The exact cause for IBD still remains a mystery. But experts say that it is connected with the immune system. Unhealthy lifestyle habits, age, family history and place where you live can sometimes become factors for IBD to worsen in some people.

Till date, a cure for IBD has not been found. With intake of right medicines, the individual can suppress their pain and bring down other symptoms. Some people might even need regular check-ups and screenings. At times, this rare disease can even be life-threatening.

For Kumudini, IBD symptoms started when she was 13 years old. Her family lives in Bengaluru and they made sure that she consulted the best doctors for the right diagnosis. Kumudini used to feel extremely fatigued, had indigestion and gradually weight loss too. Most of the doctors whom she consulted were unable to identify her condition.

Finally her diagnosis was done at the age of twenty, when she was in college. In spite of all the health problems, Kumudini completed her studies. She did an under-graduation in commerce and then a course in Company Secretary ship. “I remember running from one doctor to the other. Physicians suggested general medicines. I have spent many days in hospitals. Every doctor I met suggested a new treatment for me. But soon, it was like a series of problems”, says Kumudini.

Struggles as an adult

After college, Kumudini started to work with corporate companies. She worked for over five years before quitting her job recently. Now, she has been volunteering with a few NGO’s and is an active member of the group ‘Crohn’s and Colitis Squad’ that works towards creating awareness about IBD.

Kumudini says that medical expenses for people with the disease are high. As a working individual, she couldn’t afford it as it used to pile up to lakhs of rupees every year. “Most of my income was spent on medicines and treatment. In other countries, the government takes care of their medical expenses. But what about India? We have to struggle”, says Kumudini.

It was recently that she met many people with her same condition. ‘Crohn’s and Colitis Squad’ also offered her a platform to connect with people like her.

“In Indian there is no awareness about IBD. We started a Facebook page to create awareness on a bigger level. Our struggles often go unnoticed. I couldn’t balance my work life because of IBD. We need a normal life. This is so painful and disheartening. We are unable to socialize. Sometimes, the cramps are so painful that you cannot get out of the house during the entire day”, she says.

But Kumudini has a plan. In the next 10 years, she says that her struggles will bear fruits. More people will be made aware of IBD. “I had to lose a year at school due to my disease. We face embarrassment in school and many other places”, she says.

With a strong and determined mind and help of many others like her, Kumudini hopes to create awareness about IBD everywhere in India. As she puts, the awareness about rare diseases is going to be much better in India in another 10 years.