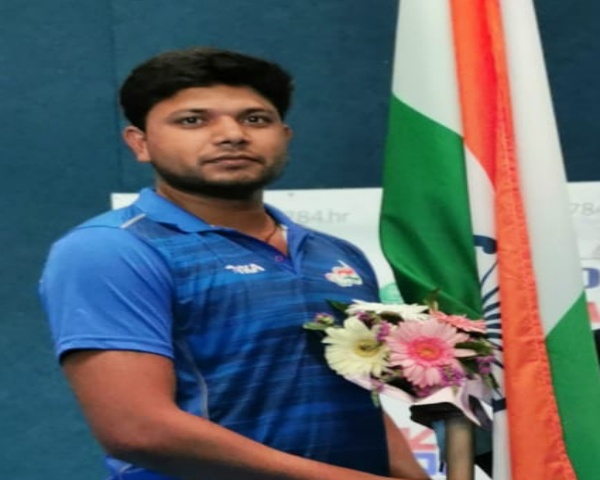 In our August series #IStandIndependent, we profile Akash, a promising para shooter looking to make his mark in the 2020 Tokyo Paralympics. Akash has maintained a consistently good performance which is pretty incredible given that he comes from a financially poor background and has received no support from his state.

He doesn’t have a shooting range to himself like Abhinav Bindra, or a pistol or ammunition. Yet 28-year-old para shooter Akash never fails to hit the mark and is raring to make strike gold in the 2020 Tokyo Paralympics.

Born in a village in Uttar Pradesh’s Baghpat district, Akash comes from a financially poor background. His father is a farmer. “I suffered a polio attack when I was less than two years old and was left disabled in one foot”, he says. “A family member introduced me to shooting and I was hooked. My father is poor, and we had no money, but he did his best to support my interest in it”.

Akash took up shooting seriously when he was 16 years old, practicing at a shooting range near his village. In 2009 he took part in his first national championship and won a bronze medal. His most recent performance at the Osijek 2019 World Shooting Para Sport World Cup in Croatia was outstanding with Akash winning two gold medals in the 50-metre Free Pistol M and Air Pistol Events. He has a total of four gold medals in international events in total.

Pretty remarkable when you consider the enormous financial difficulties he faces. While that’s a story common to many para sportspersons, in Akash’s case the situation is worse.

I have no financial support at all. My fellow para shooters from Haryana won cash awards of ₹ 50 lakh for their performances n Croatia but my state, Uttar Pradesh, does not offer any support or reward. As a result I am forced to take up odd jobs to support my children and my parents. My father has supported me a lot but now he is old and its my duty to be there for my parents now. Some kind of financial support at least to fund my equipment would help a lot. – Akash, Para shooter

Akash works part-time and takes time out to practice his shooting in his spare time. “I am grateful to my coach Subhash Rana for helping me with financial support. Thanks to him I have been selected for the world championship events and I am hoping to qualify for the Paralympics and prove my worth there”.

Akash’s coach Subhash, who is also the national coach appointed by the Paralympic Committee of India (PCI) believes Akash has great potential. “At this point Akash’s score is just slightly lower than that of fellow shooters like Manish Narwal. The difference is very small and can be easily bridged if some financial support comes his way”. He is convinced Akash can improve his game. “Balance is important in shooting and with his disability he is scoring as much as 572 which is great. His presence on the team makes India a strong contender”.

For the last one year, Subhash has been supporting him with funds for ammunition and pistol. “He used to work as a courier earlier and even after working full-time he was winning medals. I told him to leave that job and promised to help in any way I can”.

There are two international para shooting championships coming up which are crucial for Akash. The first one is in Sydney later this year and then Dubai in early 2020. These are qualifying rounds for the Paralympics and Akash’s chances of getting the quota are high.

Subhash hopes 2020 will change Akash’s fate. “He has worked so hard on his performance despite so many odds. It is so hard to keep your spirits up when people on your team are getting cash rewards, but you get no acknowledgement.
Government policies should be uniform for all so sportspersons are motivated”.