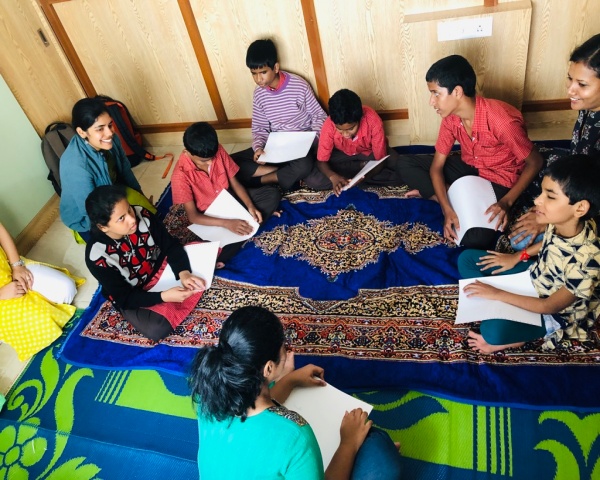 O Aishwarya is an Educational Co-ordinator at Vision Empower (VE), a Bengaluru-based nonprofit that aims to address the growing needs of STEM education for children with visual impairments. A visually impaired person herself, her personal experiences are the root cause of her passion for what she does. Her column is about Anubhav, a two-day experiential learning programme conducted by VE.

In the 2019 edition of Anubhav, seven sixth graders from Sri Ramana Maharshi Academy for the Blind, a residential special school in Bengaluru, joined the Vision Empower (VE) team for two days of fun, creativity and experiential learning. The sessions conducted include art, craft, reading, science, math, introduction to assistive technology, mindfulness, quiz, etc. The programme was designed based on information gathered from VE school interventions.

Over the two days, children were given an opportunity to gain exposure to topics not typically taught in schools for the visually impaired, such as art, colouring and painting. Recognising the need to introduce tactile pictures to children in a systematic and informed manner, a session was organised on converting three-dimensional objects into two-dimensional drawings.

The children were given common objects such as cars, vegetables and fruits with their corresponding tactile drawings, and taught, for instance, why two-dimensional representations of the same or the drawing of a car on paper has only two wheels and two windows, not four. The children’s imagination and creativity knew no bounds. “I want a pink roof, yellow walls and a red door,” one of them mentioned to a facilitator as she coloured her house. The children also enjoyed the session on origami and made colorful birds.

Through a story-reading session, children were introduced to colours in the form of a story with crayons as the main characters. There was also a session on storytelling, where the children completed a pre-given prompt with their own imaginative endings full of magic, miracles and fun.

Another popular activity was the Math Treasure Hunt. The clues and puzzles that lead the way to the treasure were mathematical in nature, and included basic concepts taught in school. The children found the perimeter of everyday objects, arranged a certain number of paper cups to form a triangle, measured the angles of a triangle, etc.

Science concepts taught through experiential learning included magnets, density, friction, etc. The children drove cars through paths made of different textures to experience friction, tested out what floats and what sinks to be introduced to the concept of density, and acted out a skit to learn about the water cycle. A hilarious moment occurred when one of the students, on being asked why an apple floats while a pin sinks, replied, “You’ve done magic in the water!”

The children really enjoyed being introduced to the different assistive technologies available. Some of the interesting new technologies introduced to them included TakeNote, a Perkins-style keyboard for easy note-taking from Enability, Hexis, a Braille book reader from VE, Subodha, an online accessible learning management platform also from VE, Torino, an accessible physical programming environment for children who are visually impaired from Microsoft Research, the Tactile Audio Gallery (TAG) device from VE.

These devices, including Tactograph, that helps in producing low-cost tactile graphics was displayed to representatives of other civic society organizations such as Matruchhaya, Rotary for Disabilities, Cisco Foundation and Wipro Foundation, to name a few.

The children were enthusiastic participants, and liked to learn by doing. The value of the workshop was not just that it was fun, but that it made learning fun and interesting. The learning from the programme will be used to create the curriculum and methods to be introduced to the children with visual impairments in the academic year 2020-2021.