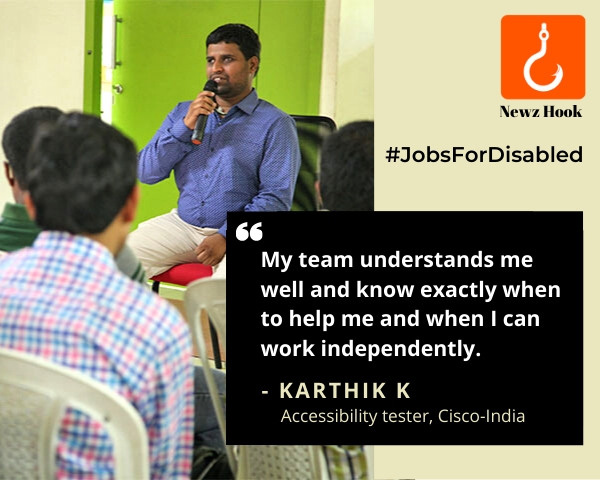 In the run up to World Disability Day, NewzHook series #JobsForDisabled brings to you stories of people with disabilities finding success and satisfaction in a range of jobs across organisations. Their experiences prove that given opportunities and support systems at the workplace, disability is no way a barrier.

Accessibility Tester at multinational IT firm Cisco-India, Karthik K‘s job involves testing the range of products that Cisco rolls out on a regular basis. “Cisco has several products and I am mainly involved in testing them”, says Karthik, who is 25 years old and visually impaired from birth. “I test the products that are sold to customers as well as used internally by employees”.

Karthik joined Cisco-India in their Bengaluru office a little over three years ago. Given that he was a graduate in the field of Arts’, Karthik was able to acquire the necessary technical skills thanks to EnAble India, which also placed him at Cisco.

Karthik joined the company under Project LifeChanger, a Cisco programme that is recognised for tapping into the potential of people with disabilities.

I am part of a great team and that helps a lot. My team understands my strengths and weaknesses well. They know exactly when to help me and when I can work independently. – Karthik K, Accessibility tester, Cisco-India

Team leader Ram Viswanathan says Karthik’s strengths became evident quite early. “One of them is listening to employees’ voices from an IT perspective”, says Ram, who is the IT Experience Lead. “We have forums where people complain about problems they are facing. Karthik listens to them and puts together a combined report. He picks up things we completely miss out on!” 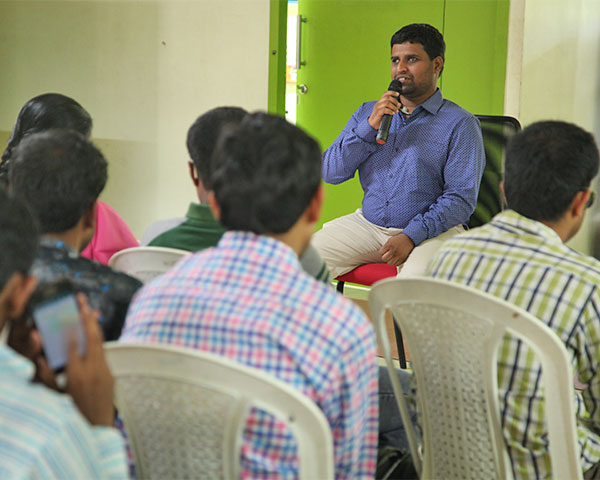 Another striking quality is the desire to improve his skills. “Karthik’s visual impairment does not stop him”, points out Ram. “There was a security certification that the team had to take called Ninja White Belt which is not accessible to visually impaired person. Karthik would go home, get his brother to translate it, and he got the certification before us. That’s the kind of initiative he shows”.

Karthik is also actively involved in CSR activities. He got together with some friends and bought supplies to help people affected in the recent floods in North Karnataka. Efforts that have won him the 2019 Cisco Bridge Award that are given every year to employees who symbolise the company’s principles. He is one among two employees from India to get the award this year. Karthik will travel to London in December to receive it.

“We don’t see him as a visually impaired person”, says Ram. “He does all the things we do and we can have a conversation with him about everything. We are a part of his team”.