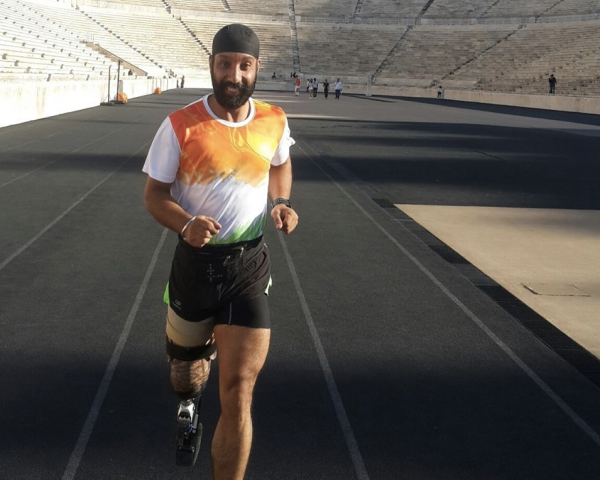 The story of India’s first blade runner Major D P Singh comes alive in the form of a graphic novel in the book Grit: The Major Story. It has been written by V R Ferose, the Silicon-based software executive and Founder-Managing Trustee, The India Inclusion Foundation.

On July 15 1999, Major Singh lost a limb during the Kargil War. He was affected with gangrene and had to be evacuated from the battlefield by soldiers who risked their lives to save him. Major Singh was even declared dead by a doctor, but he fought back and even today jokingly celebrates July 15 as his death anniversary.

The idea of writing a book came to Ferose, who is a friend of Singh’s, over a year ago. He contacted Chennai-based illustrator Sriram Jagannathan, who has previously worked on a graphic novel about disability rights activist Malvika Iyer called Mai.

With the help of details from Singh, every effort was made to bring to life his inspiring story. A man of ordinary beginnings, Singh went on to become known as ‘India’s first blade runner’, become a Limca World Records holder and the first Indian with a disability to skydive solo. The book starts with his childhood and ends with Singh getting a National Award for empowerment of persons with disabilities.

The book also has a foreword by Indian Army General Bipin Rawat, who called Major Singh a “true Indian Army soldier who keeps the country and his team above his own self”..

The aim of the book is to reach as many as possible without any barriers to read and understand its spirit of life. Thus, it’s a graphic novel in simple English. – Major D P Singh, India’s first blade runner

Speaking to the media, Major Singh said that he hopes the visual element will help connect to larger audiences. “ I understand that to connect with people, the auditory part is important but so is the visual part. The pictures you use leave a long lasting impression”. Furthermore, even children can access the content of the book and so there is a variety in the readers.

Narrating the story through images, hopes Sriram, will also inspire more people to read the book, said Sriram who spent 10 months giving it shape. “Since Major Singh is also a motivational speaker, he was comfortable opening up. I would ensure with him that my narratives and visuals were conveying the right meaning”, said Sriram to DT Next. ”As a storyteller, I needed to get all my facts right — like the Army ranks, uniform etc”. By narrating the story through visuals he hopes to get more people, children and adults, to read and be inspired.

Major Singh ran his first marathon in 2009 with an artificial leg. In 2011, the Indian Army provided him with a blade. “The first five runs were difficult. “The blade is used for extreme activities and to use this as prosthesis for an endurance activity was not possible here in India. The craftsmanship was missing”. He went on to skydive and made it to the history books as the one of the few persons with disability to do a solo skydive.