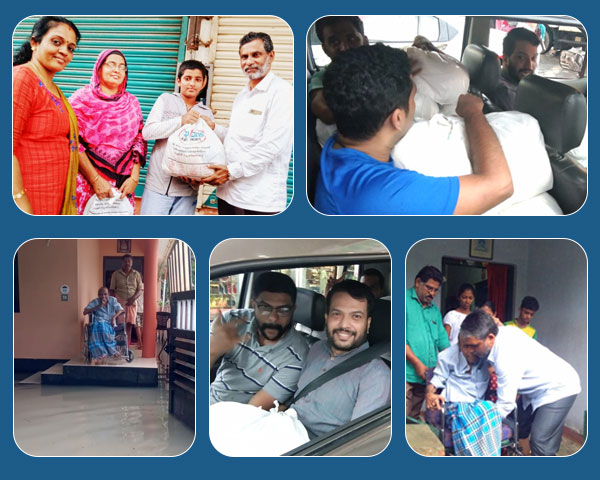 In #StoryOfTheWeek, we focus on the plight of people with disabilities in flood ravaged Kerala. With water levels showing no signs of receding, lakhs of people are affected. The plight of disabled people is far worse and ensuring that relief gets to them is proving to be a big challenge.

God’s Own Country, Kerala, desperately needs divine intervention. Exactly one year after Kerala witnessed the worst floods of the century, the state is ravaged yet again. This time it’s North Kerala that’s affected.

This is happening just as the state was limping back to normalcy after the 2018 floods. Over 80 people have died and the disaster has brought forth just how vulnerable people with disabilities are in such crisis situations. Given the heightened risk they face, there’s a need for an inclusive disaster management approach.

The lack of disability inclusion in Disaster Risk Management is seriously worrying as the impact of natural disasters is intensifying in India. This brings with it an urgent need to look at putting inclusive policies into practice. Given that India has seen a major rise in disasters and its large population, this is even more important.

This time too in Kerala, wheelchair users have been the most affected as they have been unable to move out of their homes. While some NGOs like Divyang Foundation are reaching out to them, the efforts are simply not enough given the magnitude.

Prajith Jaipal, Founder of the Kozhikode-based Divyang Foundation, says his NGO is helping out by providing food kits and clothes to people with disabilities in relief camps.

This time, our main focus is to distribute food kits to people with disabilities. We shall provide rice, sugar, tea, oils, salt and other basic groceries in the kit. This is going to be a one-month programme where we will identify beneficiaries and supply what they require. A few of us came together to pool in money for the cause. We could distribute 20 kits in two days and we are looking forward to supplying to more disabled people in need. – Prajith Jaipal, Founder, Divyang Foundation.

Given the scale and extent of the disaster, relief distribution is proving to be a challenge. “Most of the people came to know about food kits through social media and WhatsApp groups”, says Prajith. “People contact us on phone and we go to relief camps or homes to distribute it. Yesterday, we visited Koyilandy and Feroke which are badly affected and we are still getting calls”.

Another organisation that is reaching out to the community is the All Kerala Wheelchair Rights Federation (AKWRF) which is working in collaboration with Thanal Palliative Care. They are moving wheelchair users to camps or homes of their close relatives.

“We shifted 10 wheelchair users in areas like Eloor,Kalamassery and Aluva which had flood warnings”, says Rajeev Palluruthy, Secretary, AKWRF. Unlike last year, this time the organisations did not wait before moving them. “Most of them were shifted to their relatives’ homes because the camps lack facilities. We also gave them food kits worth ₹ 5,000”.

Disability rights activist Unni Maxx who is based in Muvattupuzha, was active in relief and rescue works during the 2018 floods and says that this time the impact was lesser. “This year, the situation was under control and we managed to access relief kits that were sent to beneficiaries in North Kerala”.

However, when you hear the stories of people affected, you realise how the lack of an inclusive disaster management approach is affecting lives. Take Mohammad Rafi. “Water had almost entered my home and I shifted to my mother’s home before it got worse”, recalls Mohammed, who is a wheelchair user and lives in Kozhikode. “Last year during floods, we faced a similar situation and approached the government for help but was told that unless I am at a relief camp, I won’t be given financial aid or relief. With my disability, I am unable to stay at a camp”.

Badarusaman Moorkanad is from Malappuram, one of the worst affected areas. He was forced to move out to a relative’s place after the flood waters rose. “I came back home yesterday to find my entire home under water. Now, we are working on cleaning it. I do not want to get any infection due to this unhygienic water in my home. But we have got no help from the government and I had to rely on local people to help me shift. During such crisis times, the government must step in to make things easier for people with disabilities”.

Concerns that the Rights of Persons With Disabilities (RPWD) Act 2016, which mandates the participation of people with disabilities in the disaster risk management process, takes into account. Section 8 of the Act says disabled people are entitled to equal protection and safety in situations of risk, humanitarian emergencies and natural disasters. Given this, it is incumbent upon governments, at the Centre and States to frame measures that include people with disabilities.