After weeklong rains & floods, disabled people in Kerala breathe a sigh of relief 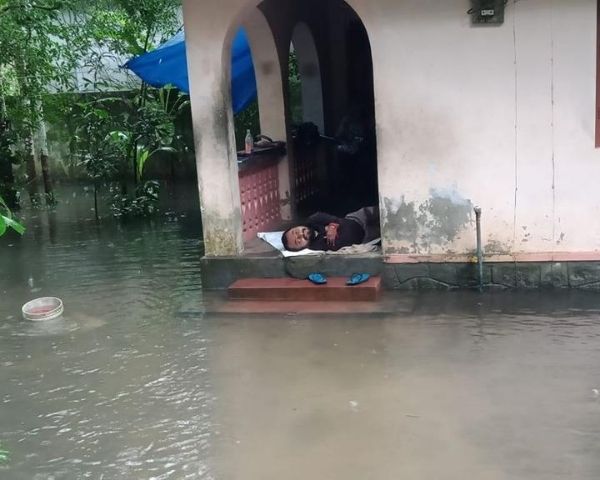 Kerala faced worst floods of the century in August 2018. It repeated with a lesser intensity in 2019 as well. This year, monsoons have receded and the worst is over. But people with disabilities across the state are worried for many reasons. They want the government to ensure facilities are made so that they do not have to live with worry and anxiety every year during monsoons.

Ganesh* (name has been changed), a wheelchair user from Chengannur in Kerala remembers the anxiety, fear and helplessness that he and his family members lived with for over a week in August 2018. That was when Kerala was hit by floods which was reportedly the worst floods of the century. Over five days of incessant rains across the state led to hundreds of deaths. People with disabilities were one of the worst affected during these times. Needless to say, lack of accessible shelter homes and society’s attitude towards disabled people made it worse.

This year, the state went through something similar. People with disabilities across Kerala have their fingers crossed. The worst is over, they believe and Kerala’s disabled community took precautions and got themselves ready to face the floods amidst a pandemic.

The first floods happened on August 2018. It killed hundreds of people from across the state, destroyed thousands of homes and left many struggling for food and shelter. Floods hit yet again during the same time in August 2019, but with a lesser intensity. Though many lost their lives and homes, most of them were prepared to face the wrath due to which the damages were lesser.

Since last week, central and northern parts of Kerala has been getting torrential rains. Though the intensity has come down, some parts are already submerged under water. This is indeed a cause for worry. People with disabilities who were affected by the floods in the past two years have already taken precautions. Some of them moved to homes of their friends and relatives. Some others are forced to move to camps set up by the government. The real nightmare begins there because these camps are fully inaccessible and not disabled friendly. Those who lived in camps last year recollects the nightmare!

Surya, who has Brittle Bone disease, lives in low-lying area Kuttanad which is one of the few places in the world which is below sea-level. Hence Kuttanad is hit by floods in no time. Surya, who has financial constraints, has not been able to even buy a wheelchair. He can use only an electric wheelchair owing to his condition. Surya is literally living on the edge. He is scared and worried whether the floods are going to cause havoc in his area. “Over the weekend, water levels rose. In fact, I could see water everywhere around me. Many people shifted to camps but I stayed back. If the water had come inside my house, I would also have shifted. But thank God, nothing of that sort happened till now,”, he says.

Anoop Sahadevan, a wheelchair user from Mavelikkara faced a similar plight. He had marked a place on the wall. So if the water reached till there, he had his bags packed to leave the house. “Last year, I went to my uncle’s house. This year I couldn’t because they were all unwell. So I was worried on how I shall shift, but nothing unfortunate happened”, he says.

A few organizations had already held awareness camps and monsoon preparedness workshops in the past two months. Thanal Palliative and Paraplegic Care Society and Kerala state government collaborated to hold a workshop on how to prepare disabled people for the monsoons season. Rajeev Palluruthy, Secretary, Thanal says, “This year only a few people had to shift homes because the intensity of rain was lesser. Most importantly, everyone was prepared for the worst. It was not as bad as the past two years”.

Prajith Jaipal, a wheelchair user from Calicut, one of the worst affected areas says that disabled people were shifted to safe camps as soon as rains started. Prajith who is also the founder of NGO Divyang Foundation reached out to many disabled flood victims in the past two years.

“Most of the people with disabilities refuse to go to camps, especially disabled women, because these camps are inaccessible. There are no proper washrooms or facilities for disabled people. We have informed this to the state social justice and welfare department. We hope they will do the needful because we need to prepare already for the coming years too”, he says.

The rains reducing and waters receding are definitely good news for Kerala’s disabled community. But they also know that this is going to be a norm every year. What they want to know is how the state government can help prepare them during these tough times.