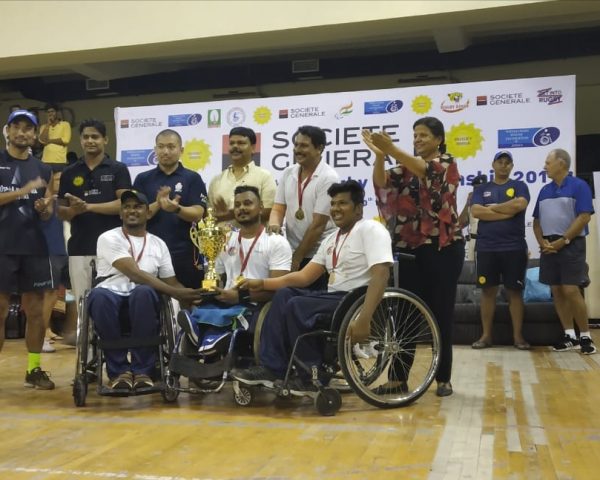 Kerala team won the national wheelchair rugby championship that was held in Patna. It was a hard fought win and players hope that this will finally attract some support and attention from the state government.

Ten teams from across India sent their best players for the national wheelchair rugby championship. Talented players from states like Tamil Nadu, Karnataka, Maharashtra, Chhattisgarh, Delhi, Bihar, to name a few put up a remarkable performance at the event held earlier this week. Bihar and Kerala made it to the finals and Kerala walked off with the top prize.

Ebin Joseph, captain of the Kerala’s wheelchair rugby team, said the competition offered an opportunity to meet some great players.

Over the past few months, we have been undergoing regular training and practice sessions. The championship was tough because players from all the states were super-talented and know the game very well. We are looking forward to attend more such national championships. It is high time that wheelchair rugby gets a new lease of life in India. – Ebin Joseph, Captain, Kerala Wheelchair Rugby Team.

Joseph is gearing up to participate in the upcoming international wheelchair rugby championship in August at Singapore. “We do not lack for talent. What we do lack for is government funding and support, especially for our Kerala team. Most of the state teams have government support, they even get their travel and other expenses covered. Our team has to pay for travel, accommodation and food”, says Jospeh.

Joseph hopes to see a change in mindset after this win. Currently, the Kerala team is using specially made wheelchairs from other states to play the game. Given that this was their first national championship, the team is thrilled with the performance.

“Currently, we have to find our own means to support the team. But we are glad that we could bring home the trophy. It was a great experience to play with talented players from across India. It was tough competition, especially the finals against Bihar”, said fellow player Riyas NP.

In spite of so many struggles, the team is hopeful of playing more matches and focusing on the game. Their love and passion for wheelchair rugby knows no boundaries.