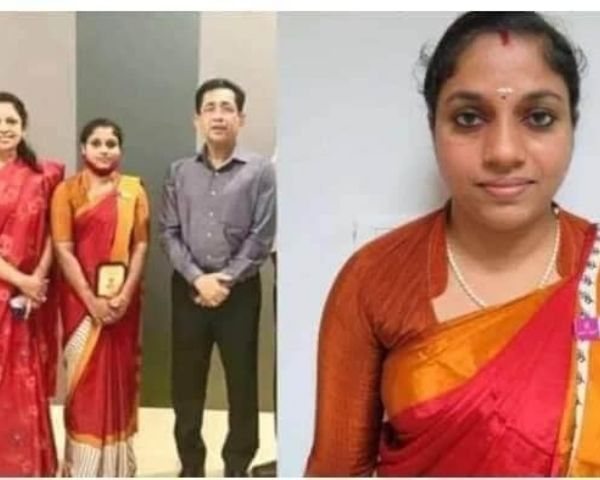 A few weeks back, video of a woman from Kerala helping a visually impaired and elderly man board a bus had gone viral on social media. Surpiya, woman in the video, was gifted a brand new house for her act of kindness by renowned business group Joyalukkas.

Remember Supriya? The Kerala woman who helped a visually impaired, elderly man to board a bus last month was in for a big surprise this week. Surpiya was rewarded a brand new house for her kind deed by none other than Joy Alukkas, Chairman, Joy Alukkas Group. Reportedly, Supriya was asked to visit Alukkas office in Thrissur and the surprise that was awaiting her was a brand new house!

An act of kindness can go a long way

Supriya works as a salesperson at Jolly Silks, a textile shop at Tiruvalla, a small town in Kerala. It was a regular day for Supriya who was waiting for her husband outside her work place when she spotted a visually impaired, elderly man struggling to get a bus. According to Supriya, he was walking on the middle of the road and almost got hit by a vehicle before she came to save him.

Upon enquiring, she realised that he was waiting to board a bus. In the video that became viral, Supriya can be seen running behind a bus. She asks them to stop it so that the man can board it. She then urges the conductor to wait a little longer while the man can be seen walking slowly towards the bus with the help of his cane. Supriya then rushes to him, holds his hands and helps him board the bus.

Clearly, one of the most beautiful things on the internet now, the video was shot on phone by Joshua who was standing in a building nearby. It took only a couple of days for the video to go viral on social media. Ever since then, Supriya has been getting a lot of praise from all corners of the world!

When renowned businessman Joy Alukkas decided to meet Supriya, he visited her at her rented house in Tiruvalla. Alukkas then asked Supriya to come to their Thrissur office. Less did she know that a grand house was awaiting for her as a surprise gift for her kind deed!

NDTV quotes Supriya saying, “I never thought it will be such a huge surprise. I was in tears as hundreds of workers of the group cheered me. It was a spontaneous act and I never thought this will fetch me so much of praise and love”.

Undoubtedly, we need more people like Supriya to prove that humanity still exists. It is people like her who makes this world a better place to live in.

Amar Prasad Reddy, Media Advisor to Union Minister of State for Health and Family Welfare tweeted, “Kindness is beautiful’: A few days back a woman who helped visually-impaired man to get on the bus is now invited to meet chairman of #Joyallukas and was gifted a residential house”.