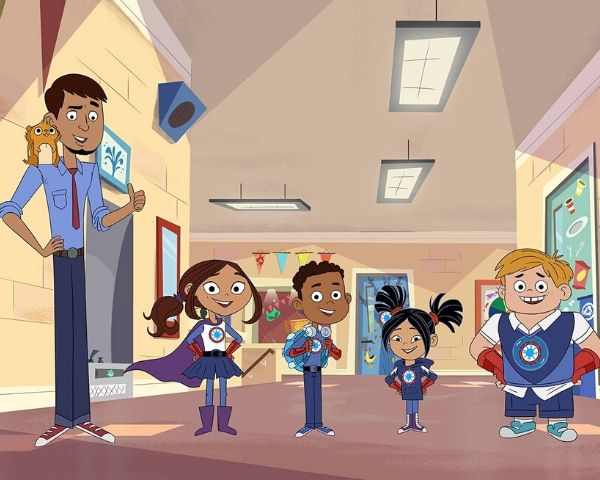 There’s a new superhero in town called AJ Gadgets with the ability to make super gadgets. He also happens to be on the autism spectrum. Read more about HERO ELEMENTARY, the new animated kids series on PBS Kids, which premiered on 1 June.

Meet the new crop of superheroes who are making news. They are just in primary school and are learning to master their special powers.

They are part of a new animated series by PBS Kids’ called HERO ELEMENTARY. The superhero students are a diverse bunch. One of them, Lucita Sky, can fly but is scared of heights. Sara Snap has the power to be transported across any distance instantly and there’s Benny Bubbles, who creates forcefields of bubbles. Then there’s a fourth kid, AJ Gadgets, a boy with a range of cool gadgets who is on the high functioning end of the autism spectrum. AJ doesn’t like loud noises or wet clothes or to be parted with his backpack. But he’s part of the team and always comes to the rescue.

HERO ELEMENTARY has the right formula to help empower kids to make a difference in their own backyards and beyond by actively doing science. The series combines excitement of superheroes and the power of science to help show kids that they can be superheroes and save the day, too. – Carol-Lynn Parente, Co-Creator, HERO ELEMENTARY

Superheroes who use the power of science

HERO ELEMENTARY focuses on various scientific principles as the superheroes battle challenging missions. These include dealing with a huge ball rolling through the city, or taking care of a baby swan. Helping them along is a teacher, Mr Sparks, who motivates them to keep looking for solutions even if they don’t succeed at first. Skills like observing, investigating, testing and predicting are encouraged. The series is designed for children between four to seven years.

Ferraro and Parente are closely associated with the popular kids’ series Sesame Street. In 2015, the show introduced Julia, a four-year-old with autism. The character of AJ in HERO ELEMENTARY, they say, developed organically.

AJ’s friends know about his needs and in one of the episodes, they are shown desperately looking for his lost backpack. Through this story the creators hope to teach empathy. “With its unique, fun and informative STEM, literacy and social-emotional learning curriculum, Hero Elementary is sure to be a heroic hit with kids, parents and teachers alike,” said Linda Simensky, Head of PBS KIDS Content.

The first episode of HERO ELEMENTARY premiered on 1 June. Each episode is of about 11 minutes. You can watch it on YouTube where the episodes are being shown in full. Watch one of the episodes Tail of One Kitty/Movie Theater Meltdown here.