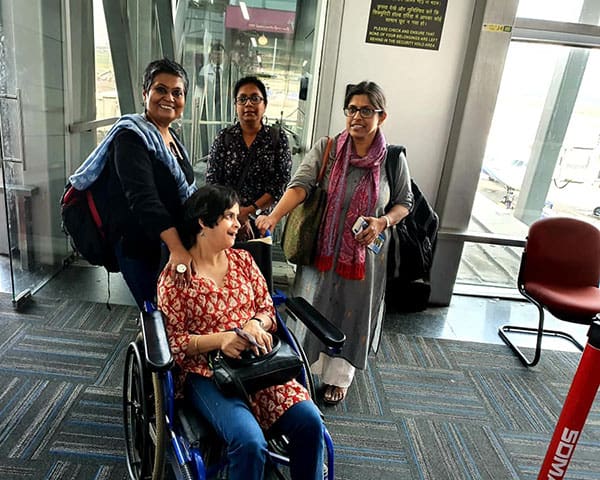 The harassment faced by three leading disability rights activists at Kolkata Airport highlights just how far behind we are when it comes to making travel accessible and hassle free for people with disabilities in India. Despite sensitisation campaigns, the fact that such incidents continue to be reported across major airports is disheartening.

”We would like to sincerely apologise for the inconvenience caused… during check in at Kolkata Airport. The matter is being strongly taken up with concerned teams to ensure that such incidents does not happen again”.

Another bland, token apology, this time from authorities at the NSBI Airport, Kolkata. This was after the outrage expressed over the harassment meted out to two disability rights activists Kuhu Das and Jeeja Ghosh, who were traveling with two other people to Delhi to attend a United Nations Convention on the Rights of Persons with Disabilities meeting on the rights of women with disabilities.

Jeeja has cerebral palsy and uses a wheelchair, while Kuhu wears callipers. Both travel frequently and are prominent voices in the disability space. What is even more shocking is that they underwent the harassment twice in the same day, just for exercising their right to travel with dignity.

In the first instance, GoAir refused to let Jeeja fly unless she was accompanied by someone. This kind of harassment is something Jeeja has faced earlier. In 2012, while flying by SpiceJet from Kolkata to Goa, she was asked to get off. Jeeja went to court and the Supreme Court directed the airline to pay her compensation of ₹ 10 lakh for “mental and physical suffering”. A judgement that was a victory for the disabled community but clearly the message does not seem to have gone through.

In this instance, Jeeja says that she had asked for a wheelchair, but that took ages to arrive. The airline told her it was short-staffed and she finally reached the check-in counter, she was told she could not travel without an escort. She was finally allowed to travel only after her companions took the issue up with the higher management.

In Kuhu’s case, things were far worse. A Central Industrial Security Force (CISF) staff member asked her to remove her callipers so that they could be put through the scanner. Speaking to the BBC, Kuhu said that when she refused, the CISF official called another officer. “She told her colleague that she had never seen anyone like me before. It was like I had come from another planet. How insensitive is that? It is unacceptable that every time in India, they want me to take off my callipers which effectively means they are asking me to take off my trousers”.

It is sad, shocking and demoralising to see that people working at the airport lack awareness about how to behave with people with disabilities. The staff did not have the basic understanding about treating a disabled traveler with dignity. Instead all we saw was ignorance, bias, discrimination and rude behaviour towards us. – Shampa Sengupta, Disability rights activist

Kolkata Airport’s apology, however heartfelt, does not address the larger issue. Despite the discourse on disability evolving over the decades, the passage of the Rights of Persons with Disabilities (RPWD) Act 2016, and sensitisation campaigns, such incidents are all too frequent. In 2017, the CISF even said that passengers with disability will not have to remove prosthetic limbs for security check at the airport and that wheelchairs would no be screened through X-ray.

The Kolkata Airport according to reports has promised to address the issues raised by these incidents. Airport director Kaushik Bhattacharjee called for a meeting with all stakeholders on Monday to go through the standard operating procedures of each agency to handle the needs of people with disability. The four activists too have offered to conduct a sensitisation programme for the officials and staff there.