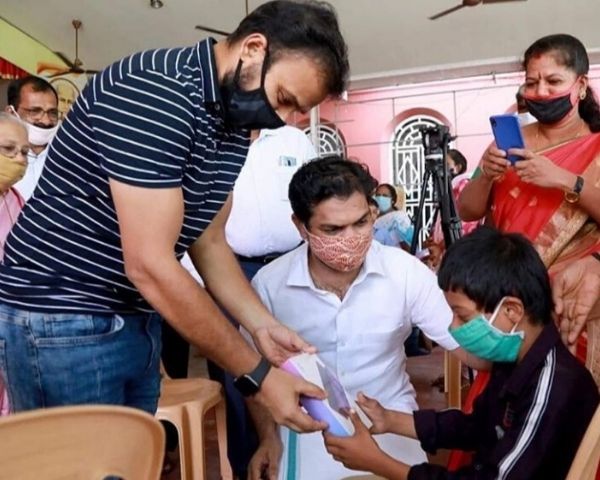 Renowned Malayalam actor Kunchako Boban recently handed over 18 tablets for children with disabilities in Kochi. This was done as part of the ‘Tablet Challenge’ initiated by Member of Parliament Hibi Eden. The actor took to his social media to share a photo from the event, and he received a lot of love and appreciation from his fans on social media.

Malayalam actor Kunchako Boban needs no introduction to South Indian film audience. He has made his mark in the industry by donning some exceptional roles and charming presence on-screen. The 43-year-old actor recently won hearts of a group of disabled children in Kochi. He took part in the ‘Tablet Challenge’ and distributed tablets to them. Kunchako took to his Instagram to share a photo from the event.

‘Tablet Challenge’ was introduced by popular Member of Parliament Hibi Eden. Currently, students across Kerala are undergoing online classes due to Coronavirus crisis and shutting down of schools. But many have been unable to attend these classes due to lack of computers and mobile phones at home. In fact, a class 10 student named Devika died by suicide at Wayanad because she did not have a gadget from which she could attend online classes!

Hibi stepped up to do his bit and donated tablets to children from economically backward families. More than 100 tablets have already been distributed with the support of actors like Jayasurya, Tovino Thomas, Manju Warrier and other prominent members from politics.

As Kunchako Boban walked into the room, the children could not hide their excitement looking and adoring their favorite star. The actor, who was accompanied by Hibi was all smiles too!

“Happy to be associated with the Tablet challenge organized by our dear MP Hibi Eden. And the event was extra special as it was given to the specially gifted kids from different schools. Thanking all the kind hearted people who helped and supported the movement. God bless all”, posted Kunchako.

Popularly known as ‘Chackochan’, this heart-throb of Malayalam cinema has won the hearts of many young children, yet again. He was last seen in the blockbuster thriller movie ‘Anjam Pathira’ which broke many records.

Kunchako was flooded with love and appreciation on the comment section soon after he posted a photo of him handing over the tablets.