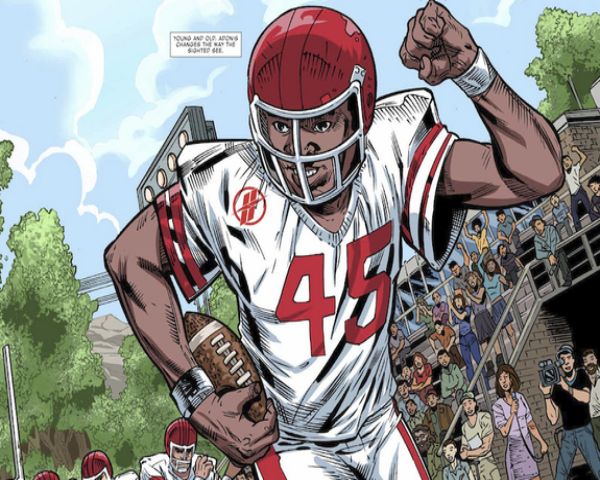 Every week Marvel’s Hero Project series, streaming on Disney+, tells the story of a young hero who is helping to bring about a positive change in the world. The latest episode features Adonis, a professional football player who is blind. You can read the episode for free! Get the details in the story.

15-year old Adonis Watt always wanted to play football. Coming from a family that is passionate about sports, he took to playing football when he was quite young. The enthusiasm never faded even after Adonis lost his sight at the age of five and was diagnosed with congenital glaucoma, a rare condition.

In September 2018, Adonis made headlines across the United States after he scored two touchdowns while playing for a high school match. An incredible story that has been brought to life in the latest episode of the Marvel’s Hero Project series that streams live exclusively on Disney+.

The comic on Adonis featured the blind teenager as Unstoppable Adonis, who has athletic strength and heightened senses. Marvel has made sure that Adonis can access his story by printing it in Braille.

How does this young man feel about joining legends like Black Panther and Captain America in the Marvel world? “? “It’s cool that Marvel decided to pick real kids out here … and make them public figures,” said Adonis to The Hollywood Reporter (THR).

This is the first time that Marvel has done a full-length story in Braille, a moment that Steve Wacker, Vice President, Creative and Content Development said “felt special” to THR. The pages are textured too so not just Adonis but other blind and low vision people can enjoy the story too. The action is presented page-by-page and panel by panel with the text included. The audio visual version presents the action, characters and the full story in an accessible way. Read the story for free by clicking this link.

While writing the story, the Marvel team put the focus on the senses that Adonis uses more, specifically in the context of the football field. He is shown as a star athlete regardless of his blindness.

Marvel’s Hero Project puts a spotlight on youth who are changing their communities for the better by immortalising them as heroes in their own comic books. A story on someone like Adonis, who has persisted with his dreams of a career in professional football despite setbacks, it is sure to pave the way for athletes with disabilities.

“What caught our attention about Adonis’ story is that a whole community came together around him to support his dream – and that he’s doing things off the field to show that visual disability doesn’t people back from making their dreams reality,” said Liza Wyles, Executive Producer, Marvel’s Hero Project and Director, Development for Marvel New Media, to Newsarama. “Adonis’ family followed him, he’s a leader – he has goals. I think it’s a great message to share, that even if a dream seems really big, even if it seems ‘impossible’, it’s not. You can do anything.”

You can read Unstoppable Adonis here.