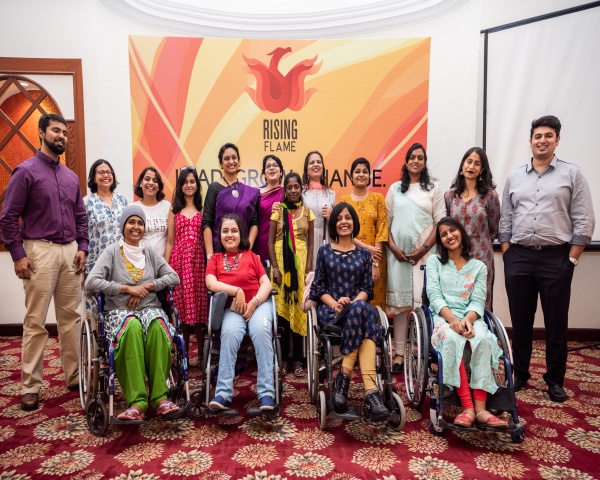 Arjita is a recent graduate of the Tata Institute of Social Sciences, Mumbai and is currently working as a programs officer in Rising Flame.

On a warm Friday afternoon in Delhi, at Rising Flame’s Lead. Grow. Change. event, the house was packed. Taking place at the Taj Ambassador in Khan Market, the guests weren’t quite sure of what to expect from the event; an event that centered the voices of women and youth with disabilities.

The lack of representation of intersectional identities within the women’s movement has long been subject to criticism. It would be appropriate to say that women with disabilities have been treated as a welfare concern or included with a charity lens rather than as social and political beings. For this very reason,Lead. Grow. Change. was a milestone for women and youth with disabilities.

Rising Flame, a young Mumbai-based non-profit working for the rights of women and youth with disabilities, celebrated their two-year anniversary by creating a space to listen to the voices of the people they’ve been working with. Six brilliant young women from Rising Flame’s flagship leadership programme for young women with disabilities shared their stories alongside panels with prominent disability rights activists discussing consent, leadership, participation and voice.

The event started with a warm welcome by Rising Flame’s founder and executive director, Nidhi Goyal followed by a dive into the journey by Senior Programs Consultant Srinidhi Raghavan. Special invitees, former chairperson, NCPCR, Stuti Kacker and Member, National Human Rights Commission (NHRC), addressed the crowd as well. They spoke of gaps in data, missing voices, the struggles and the empowerment of women with disabilities.

The event highlighted issues we are still finding space to articulate within mainstream movements and events; issues of smothering of voices, care, consent and daily living. The significance of these talks was that the voices, opinions and assertions came from the community itself in line with ‘Nothing about us, without us’, an idea that the disability rights movement centres.

Asharani Devaiah, a woman with low vision, kickstarted the series of talks. She spoke of her struggles of not fitting in, needing support but being too afraid to ask for it and finally moving past her own judgements. Nalini Sagar, also spoke of similar hurdles. However, in Nalini’s case, it was the excess support that was holding her back. Srishti Pandey, a wheelchair user, recounted oscillating between gratitude for her friends for keeping her access needs in mind and heartbreak at their ableist behaviour. She said, ‘On most days, I would feel like a burden. My brain would sideline all the favours that I had done for them and only focus on the favours that I received’. Their talks focused on an important point that people with disabilities are told to be grateful for the support and care they receive. Irrespective of their own choice in the matter.

The panel that followed addressed issues along the same lines. This was moderated by Nidhi with well known activists: Smita Sadasivan, Meenu Bhambhani, and Amba Salelkar joining in. The discussions focused around women with disabilities and their access to medical health, bank accounts, negotiating consent, and the language used. Amba pointed out how instead of letting women with disabilities be part of decision-making, they are often told that they are incapable of making decisions for themselves or simply don’t have enough information. The panel led us to question the lack of disabled women’s perspectives in our everyday lives.

During 16 days of Activism in 2017, Rising Flame made a film called Ending the Silence featuring stories of violence. This film was screened at the event to remind us about the continued exclusion of women with disabilities. The film highlighted the barriers they face while reporting abuse such as structural and systemic barriers, disbelief.

While the women’s movement focusses on romance and consent, women with disabilities were mostly absent during the #MeToo movement in India and across the world. To fill this gap, the panel and talks by our fellows focused on how we understand consent as women with disabilities. Kavya Mukhija, Shreelekka Sriram and Pratishtha Deveshwar explained consent in different ways but highlighted the idea of how violations occur in the case of women with disabilities. From simple things like asking their families about what they would like to eat to much more serious decisions such as assuming control of their bank accounts.

The panel that followed deconstructed consent further. Nidhi highlighted how popular culture and media has continually shaped our understanding of disabled people. Misrepresentation of a community can be problematic since widely consumed media such as film can leave lasting impressions with people and could do irreversible damage. Amidst the jokes, some grave issues were highlighted such as non-disabled people’s tendency to encroach on disabled peoples’ personal spaces and ask inappropriate questions. Harpreeti Reddy recalled how people would often touch her to get her attention. Consent varies based on the disability, the need for support and the overall agency provided to the disabled person.

The talk and panels of women and youth disabilities at the event were testaments of violation, exclusion, dependency, and powerlessness that is experienced by disabled people, particularly women and youth with disabilities everyday. To be an ally is a process; a process of recognising, listening, educating, and resisting. The wonderful audience present the event, enthusiastically participating resonated this. The event was a beautiful instance of allyship of two movements coming together and of political and social progress.

For more information visit the Rising Flame website. Or email at team@risingflame.org