Leopard beaten to death & paraded as trophy in Assam 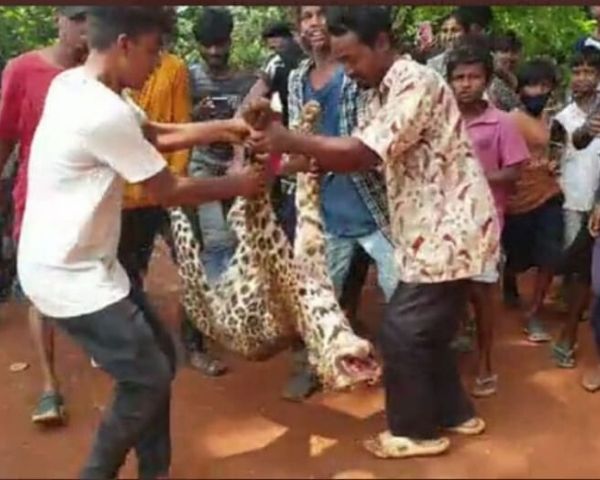 Human-animal conflict is undoubtedly at its peak now. Two weeks after a pregnant elephant was killed after coconuts filled with firecrackers burst inside its mouth, a leopard was brutally killed in Assam. The shocking incident is reported to have happened at a residential colony at Guwahati. The leopard that accidentally ventured into the area was chased and killed by a group of men. They later paraded its carcass across the village. The disturbing video of the dead animal being paraded as a trophy has been doing the rounds on social media. Six people have been arrested in connection with the case. More arrests are underway.

Acting swiftly, @GuwahatiPol arrested 6 people, including a juvenile for the killing of a Leopard that took place today at Katahbari Pahar. Gorchuk PS Case No 315/2020 has been registered and investigation is on to apprehend others involved- Assam Police.

The forest officials were alerted about a trapped leopard. But by the time they arrived at the spot, the animal escaped. A few locals chased it down to the forest and beat it to death. Though the locals said that the incident could have been avoided if the forest officials arrived at the right time, authorities pointed out that chasing and killing the animal is a heinous crime.

Over the past few months, wild animals moving to residential areas is becoming quite common across India. This is mainly because all the forest land are destroyed with animal habitats being invaded by humans. Most of the times, helpless animals turn to human areas in search of food.

Two weeks back, a pregnant elephant was given coconuts laced with firecrackers by culprits. After the firecrackers burst inside its mouth, the elephant spent over two weeks with a burnt jaw before finally getting into a river before breathing its last. The incident had created international outrage with renowned people asking Kerala Chief Minister Pinarayi Vijayan to take swift action. The latest brutal killing of the leopard is equally heart-warming.

The act was condemned on social media by many users.

“After a disturbing incident of death of pregnant elephant in Kerala, another incident of Leopard killing has surfaced in Assam. I urge YOU all to take the LEAD in your respective regions & spread the message of #CompassionForAnimals. Who would like to volunteer?”, tweeted forest officer Ankit Kumar.

“Fifth Leopard Killed In Assam This Year, Locals Chop Off Its Teeth And Nails in Guwahati. He was lynched to death and a procession done with his corpse. Outrageous”, tweeted Saswati Sarkar.