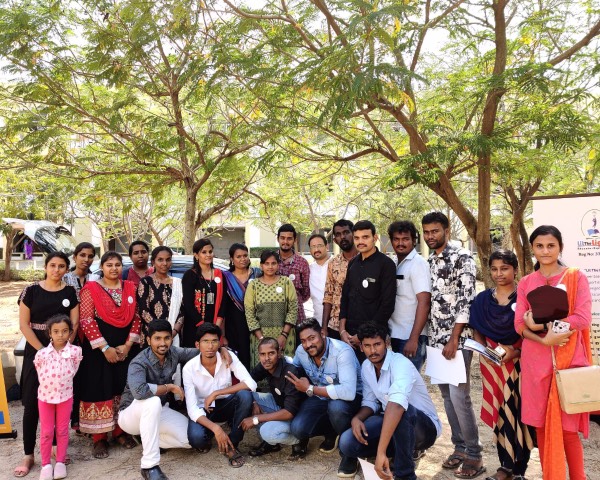 ‘Lit the Light’, an NGO that empowers visually impaired people held an event called‘Read Fest 2020’ in Madurai where volunteers read out textbooks and other academic materials to blind and low vision students. Over 150 people participated in the event.

The weekend saw a special event in Madurai in Tamil Nadu where over 150 visually impaired students and volunteers from NGO Lit the Light hosted an event called ‘Read Fest 2020’.  The event aimed to create awareness about the daily struggles and challenges faced by visually impaired students. The success has led the organisers to think of organising the event on a regular basis.

Barath SN, Founder, Lit the Light says that, his NGO aims to break barriers between visually impaired people and those who have vision.

Over the years, I realised that there are many youngsters who wants to help visually impaired people. But they are unaware on how to do it. At ‘Read Fest 2020’, a one on one session is held where the volunteer will read out textbooks and other study materials to the visually impaired student. This was a two hour session. That way, both the parties will benefit. Reading out makes things easier for visually impaired students too. – Barath SN, Founder, Lit the Light

In Chennai, the reading sessions are conducted every week. There is a huge turnover of visually impaired students and volunteers who attend the event. “In Madurai, there is lesser awareness about disabilities. So we decided to host the event in this side of the state last weekend”, says Barath.

Barath and his team did not expect a huge turnout of volunteers. Over 180 people came forward to lend a helping hand to visually impaired students. Most importantly, all the participants realized the struggles faced by students who are blind.

“We are really happy with the way ‘Read Fest 2020’ went in Madurai. Both visually impaired students and volunteers are satisfied. That is why we plan to do this every weekend in the city”, adds Barath.

“I always wanted to give back something to the society. But never took the initiative. But this was an apt platform to help many people in need. Moreover, it was en eye-opener to how many scribes are required for visually impaired students. I will be a part of this venture in the future also”, says Meenakshi Bhaskar who was one amongst the volunteers.
For more details, you can contact Barath at +91 98949- 49878.

As government cuts down benefits, students with disabilities in Kerala tread unchartered waters

Spixels, the photography contest for youth with disabilities, focuses on the post coronavirus world