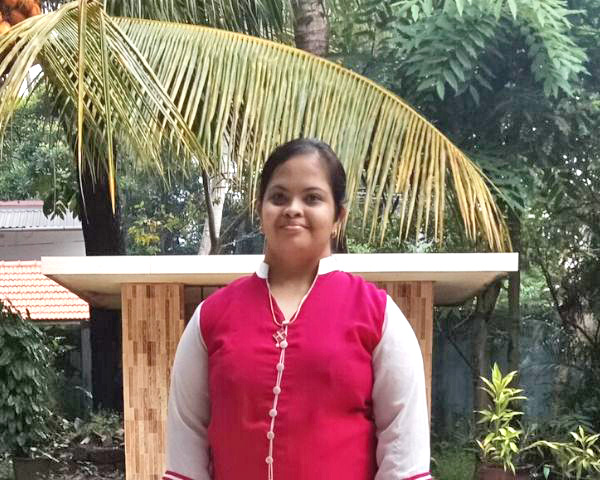 In our month-long series #CelebratingDownSyndrome, today we feature 36 year old Lizma John. This youngster was diagnosed with Down syndrome soon after she was born. After years of empowering, Lizma works at Malabar hospital at Kozhikode in Kerala as an assistant. A computer geek, Lizma has many dreams and ambitions.

When Lizma John was born, her mother Wilma and father John were excited. Being born as a premature baby, she did have some health complications too. But within a few hours, the new parents realized that their daughter had mild Down syndrome. But they were determined to reach out to her and give her nothing lesser than the best. After years of empowering, Lizma, who is now 36 years old, works with a leading hospital in Kozhikode as an assistant. A computer geek too, Lizma proves that her disability does not stop her from dreaming big.

Lizma’s father John was a research scholar. She was born at the famous Vellore Medical College. So as soon as she was born, experts at the hospital diagnosed her condition.

Lizma being the only daughter, was the center of attraction in her family. Her mother Wilma recollects how she used to spread joy wherever she went and whoever she interacted with.

Her growing up years were not too hard on her parents. Though she had Down syndrome, Lizma could walk and do things normally. With proper speech therapy, Lizma developed her speech skills too. Throughout the journey of Lizma and her parents, their family stood as constant supporters.

My husband passed away a few years ago. But Lizma has always been our ray of hope during all the hard times. I worked as a professor and retired a few years back. After Lizma’s birth, I took a five year break from work to stay with her. That was one of the best decisions of my life. When she was born and I realized she had a disability, I was shocked. I still do not have words to express what I felt during that time. But we have overcome all that. I believe Lizma is God’s answer to my prayers- Wilma John, Lizma’s mother.

Lizma completed her class 10 from a leading mainstream school in Kozhikode. She later joined for higher studies but dropped that to pursue her love for computers.

Wilma remembers that it was during one of Lizma’s birthdays that she got a computer as a gift. “Ever since then, she has been glued to computers”. After completing her computer course, she even got a certificate with which she could apply for jobs. “During that time, many companies were willing to hire people with Down syndrome. The number of kids who came out was lesser. Now, more youngsters with disabilities are coming forward and that is great”, says Wilma, who works as a coordinator for an NGO.

Lizma who loves teaching, has worked for a couple of organizations in the past before joining Malabar hospital two months back. Her good hand-writing skills has also helped her a lot.

“There are many parents who refuse to bring their disabled kids outdoors. That is so disheartening. Treat them just like how you would treat any other kid. A child with Down syndrome needs a lot of attention and care. Give them all that”, says Wilma.

Lizma loves her new role as an assistant at Malabar Hospital. Her job mostly includes checking files for patients, working on scanning machine and so on.

Ask Lizma about her future plans and pat comes the reply, “I want to become a computer expert. I want to learn more about computers and maybe even teach it to other kids. Right now, I’am in love with the job that I do”.