As a woman with disability, M Karpagam faced many barriers from childhood. That has only sharpened the activist in her. Now as Madras High Court’s first visually impaired female lawyer, she is out to break stereotypes about disability.

“When an engineering college in Tamil Nadu withheld my seat because I lacked a disability certificate and mocked me for being visually impaired, the incident was etched in my soul. I couldn’t forget that and decided to take up law”.

The fire in M Karpagam’s belly is evident as she recounts an incident dating back nearly seven years. Growing up as a visually impaired girl in small town Tamil Nadu was not easy and there were times when Karpagam was side-lined, even harassed because of her disability. Moments that led her to study law after getting a degree in biomedical engineering from Anna University.

“My parents are not educated, and they had no idea what to do when I was diagnosed with congenital glaucoma”, says Karpagam, who is 26 years old. “Doctors told them I was completely blind”. Karpagam’s uncle brought her to Chennai for treatment at Sankara Nethralaya, the not-for-profit institution for eye care. After many surgeries, she was able to see partially.

Until she was eight years old, Kargama studied at a village school, later moving to Chennai where she enrolled at a mainstream school.

“My parents did not tell school authorities that I was disabled. I would go right up to the blackboard to see what was written”, recalls Karpagam. “Teachers complained that I was disturbing other students’ and my parents were told to enrol me in a special school”. Karpagam’s headmistress intervened on her behalf and she could stay in the same school.

The competition at a regular school is so much tougher than a special school and I realised that people looked at me differently because I was disabled. I would even be mocked. I decided to fight back by doing well academically. That way I would be taken seriously. Academics became my sole focus. I craved for opportunities to participate in sports and theatre but those never came my way because I was visually impaired. I was at best a substitute, but I had a fighting spirit and still came forward for everything. – M Karpagam, Lawyer, Madras High Court 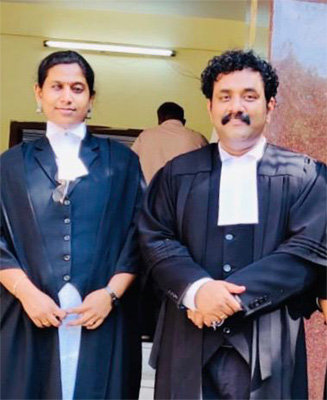 That fighting spirit was supported by younger brother Suresh Mayavan. “Suresh would accompany me from school to home and was always concerned about my safety”. Suresh, who runs a small business in Chennai, says it was his duty. “After school I would not stay with my friends but go stand in front of her because I knew that otherwise she would not be able to identify me as everyone was in the same uniform”.

Her determination and independence saw Karpagam excel in school. She wrote the class 10 state board exams on her own. “There was no scribe or computer, I would hold papers and books close to my eyes and read”, she says. Karpagam wanted to study medicine but opted for biomedical engineering given her disability and later law at Ambedkar Law University where she was given an endowment and was a first rank holder.

After her degree she worked with a senior counsel to learn the nuances of criminal law. However, her disability made them reluctant to let her go to the courts. “They were over cautious and worried I might fall down”. Determined to make her presence felt in court, she joined R Prabhakaran, Chair, Pravda Associates, an international law firm that specialises in corporate law, public interest litigation, writ petitions, civil and criminal litigations.

“I was a little sceptical about Karpagam arguing a case as she has only 30% vision”, says Advocate Prabhakaran. Her commitment and outstanding academic record convinced him. “Given the opportunity, I felt sure she would perform”. Karpagam proved him right. “She has a phenomenal memory and can reproduce details she has heard just once”, he says. “She stays focused on the key points and does her research well. Many sighted lawyers lack her depth of information. Her academic background in engineering enhances her analytical and reasoning abilities. The message she delivers is that confidence and hard work can help overcome many obstacles”.

Karpagam brings a keen sense of social justice to her work as she sees law as an instrument of social change. Her PIL that led to a probe into how accessible temples in Tamil Nadu are. “The PIL showed that 38,000 temples under the administration of the Hindu Religious and Charitable Endowment Board are not accessible. Post that work started on making them accessible to people across disability types”, she says. Similarly, she took up the cause of rehabilitating people with disabilities left destitute during the coronavirus pandemic.

Karpagam is also the founder of Voice for the Voiceless Indian People Foundation that aims to empower the disabled community. The NGO was behind the recent launch of a restaurant in Chennai where sign language is the only mode of communication.

Qualities that have won Karpagam the admiration of those who have seen her work. Justice A H M D Nawaz, President of the Court of Appeal of Sri Lanka, regards Karpagam as one of the best junior counsels he has worked with.

“I find in her a strong sense of social justice which potently drives her to institute cases in public interest with a view to redressing the parlous conditions of the downtrodden and the downcast. I have interacted with this exceptionally talented lady who deserves my unreserved encomiums for her unstinted assistance to me by way of finding for me Indian case law on diverse topics as I was interested. She is a highly motivated and determined lady with an inexhaustible reserve of energy for hard work”.

As a female lawyer with a disability Karpagam is aware of the powerful statement she makes.

“Disability needs to be looked at differently and that can happen only when more disabled people come forward as lawyers. I have faced many difficulties as a visually impaired person in court but like other non-disabled lawyers, I can draft, file and argue. My dream is to see more women with disabilities take up law”.