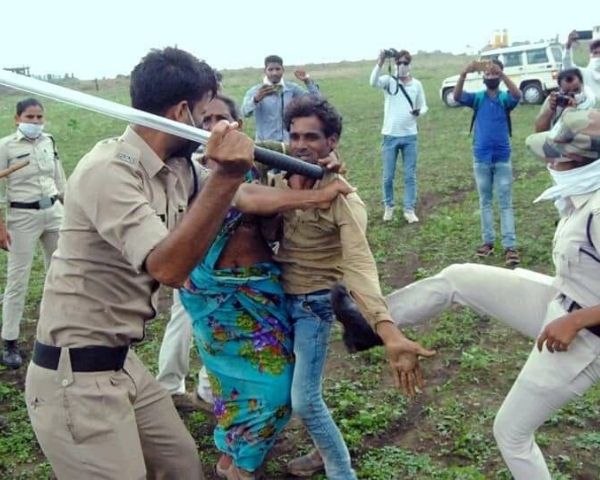 In a shocking video that has been doing the rounds on social media, a farmer and his wife can be seen being assaulted by cops in an incident that happened at Guna in Madhya Pradesh. Reportedly, the couple were trying to stop officials of the revenue department from destroying their crops which were allegedly grown in government land. The incident has created an outrage on social media. Congress leader Rahul Gandhi was amongst those who tweeted about it.

Our fight is against this mentality and injustice- Rahul Gandhi, Congress leader.

38-year-old Ram Kumar Ahirwar and his wife Savitri Devi grew crops in the land which was reportedly claimed as government owned. Officials wanted to destroy the crops to build a boundary wall for an upcoming college in the area. Ahirwar and his wife who had standing crops there, could not bear the sight of their sweat and toil being destroyed to which they reacted.

In the video, the couple can be seen being dragged by a group of policemen. Even their children were not spared and was pushed away by the cops. The couple then drank pesticide but was rescued and admitted to a government-run hospital at Guna.

Chief Minister Shivraj Singh Chouhan ordered for removal of Guna Collector S Vishwanathan and Superintendent of Police Tarun Nayak after the incident came to light. He also stated that his government will take strong action against those who use force against common people.

“The Guna SP and Collector have been removed, and inquiry has been sought into the incident. I am confident that action will be taken against all those who are responsible for this heinous act”, tweeted Jyotiraditya Scindia, Member of Parliament, Madhya Pradesh.