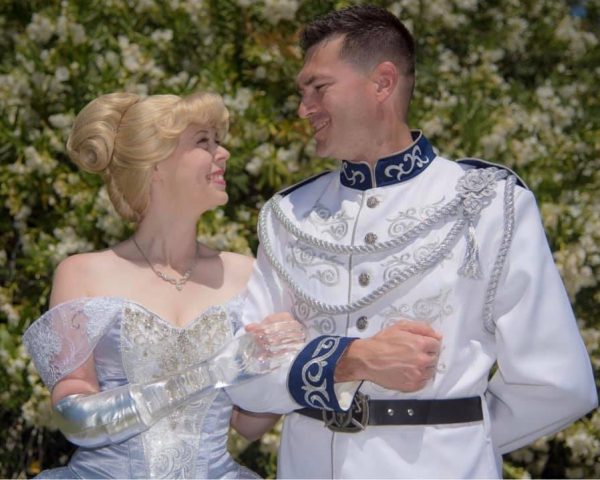 American Mandy Pursley is an amputee who lost her right forearm during childhood. She recently created a Cinderella dress with a twist. If the Disney character wore a glass slipper, Mandy had a glass arm. She re-created Cinderella and her prince in many photographs posing along with her husband. Her beautiful photo-shoot is now going viral on social media.

Disney fairy tales are something that every child loves. The characters in each tale are etched in young minds and that is what makes these stories unique. What if there were characters with disabilities? It would indeed have become more beautiful. Mandy Pursley, who is an amputee, has never come across any characters with disabilities in fairy tales. While telling stories to her daughter is when she realised that she needs to become a role model. That is how this young mother created a Cindrella dress. If Disney’s Cinderella had a glass slipper, Mandy’s had a glass arm. The picture of Mandy and her husband re-creating Cinderella and her prince through photographs have gone viral on social media and has been garnering a lot of attention.

She spent over 60 hours making her unique dress and sewing it on her own, and it can easily cost up to 300 dollars and more.

At long last…Cinderella — with a glass ARM! After a medical fiasco kept me from competing at a costume competition this summer, I was going to keep these photos under wraps for another year to try again. But a friend asked me today if I had any pictures I could share with a little girl who was born with one arm, and I realized that we never know what the future may hold…but we can still bring joy to people today! This whole project was done with a lot of love-Mandy Pursley.

Mandy shared that while telling stories to her young daughter is when she realised that there were no princesses like her. “When I was growing up with a physical difference, I never saw girls like myself represented in the media, so it took me a long time to realize that what makes us different can also be the thing that makes us strong, beautiful, and unapologetically unique”, she added.

Artist Gilbert Rozano helped Mandy to create the beautiful glass arm too. Photographer Kelly Anderson clicked some beautiful images of Mandy and her husband which has been shared over 30,000 times on social media including Facebook and Twitter.

“I was so honored to be the fairy godfather for Mandy Pursley’s (Cinderella) glass arm I loved the magic!!!Photos by Kelly Anderson”, tweeted Gilbert.

A lot of praise and love is being received for Mandy and her beautiful Cinderella dress. With such beautiful photographs doing the rounds on social media, Mandy hopes that more young girls who are amputees realise that they are special in many ways. Undoubtedly, a disability does not determine a person. “#GoodNewsStory with a slight change of perspective anyone can improve their worldview, #kudos to #cosplayer Mandy Pursley for tweaking the traditional #Cinderella story with an #inclusive twist”, tweeted Terry Wiens.