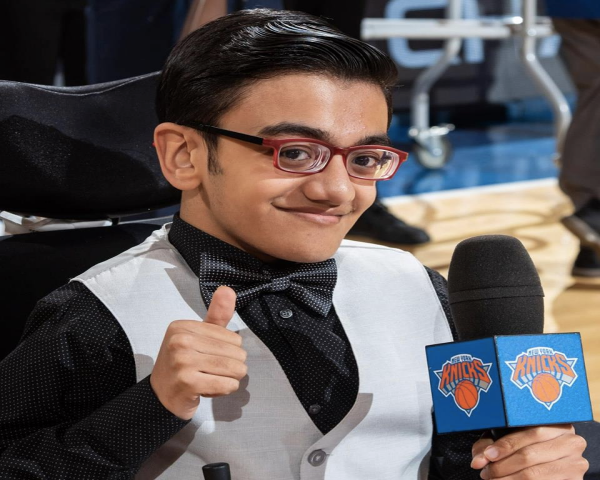 Among the highlights of the glittering Howdy Modi event at Houston, Texas on Sunday was the singing of the Indian national anthem by disabled teen rapper Sparsh Shah. The 16-year-old Indian American who has a rare condition called brittle bone disease was thrilled to perform before Prime Minister Narendra Modi and United States President Donald Trump.

Sparsh Shah, also known as Purhythm is no stranger to fame. At 16, this disabled rapper, singer and motivational speaker has made headlines for his music albums and speeches. Now Sparsh, who has a rare medical condition called osteogenesis imperfecta or brittle bone disease, is making news again!

Sparsh wowed audiences with his rendition of the Indian national anthem at the big ticket Howdy Modi event in Houston, Texas on Sunday. The event was held in honour of Prime Minister Narendra Modi at the NRG Stadium and was attended by United States President Donald Trump as well.

Speaking to the media ahead of the Howdy Modi event, Sparsh shared his excitement.

I am very excited, humbled and blessed by the fact that I am performing for Prime Minister Narendra Modi. I am honored and humbled to be invited to sing the Indian National Anthem at a community summit in honor of the Prime Minister of India, I am so excited to perform in front of the President of the United States of America, Mr Donald J Trump as well as 50,000 audience members. – Sparsh Shah, Singer & motivational speaker

Sparsh, who uses a wheelchair, has a strong creative side, one that he started exploring quite early despite his condition. Even a strong handshake can break his bones and over the years he has broken over 130 bones in his body. He broke almost 40 bones during birth.

Sparsh, however, chooses not to dwell on his condition but prefers to talk about his musical goals, and that is to become the next Eminem and do a show for an audience of a billion people.

His life has also been captured on film. In March 2018 a documentary called Brittle Bone Rapper focused on his journey until now and the fight against the condition in which fragile bones that can break easily.

Sparsh first shot to attention when he recorded a video covering of the Eminem hit ‘Not Afraid’. This got more than 65 million views and was noticed by Eminem’s record label as well.

Sparsh also loves to motivate people with inspirational talks and has appeared on the hit UK TV show Big Shots Little Shots. His first album called Purhythm is an example of his unique music style. He started learning Hindustani classical music when he was four years old and performs regularly at community events and local radio stations. He was just three years old when he started learning the keyboard and reading books. But because his bones kept breaking, it was difficult for him to continue to learn the keyboard and he had to stop playing.

In an earlier interview, Sparsh has said, “I don’t see myself as disabled. I just dis the ‘dis’ from disabled. Most people with disability always keep thinking about their disability and that makes others think about it too. I want to be the courage of such people”.