Kerala youth gets electric wheelchair from donor, but stuck indoors due to poor road conditions 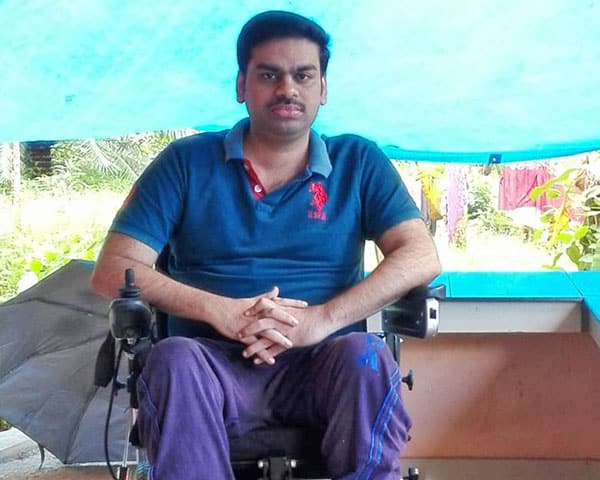 Kerala youngster Midhun VP’s story summarises the many accessibility barriers people with disabilities come up against at various levels. This young man from Vadakara has muscular dystrophy and is a wheelchair user. Now, he finally has an electric wheelchair from a group of donors, but cannot use it as the roads outside his house are in a pathetic state. Requests to authorities to repair them have been ignored.

Like anyone his age, 29-year-old Midhun VP is raring to be on the move and independent. Diagnosed with muscular dystrophy, a few years ago, Midhun is a wheelchair user. He is looking for a job to support his family.

Midhun’s life changed when he was in class 5 when he was diagnosed with muscular dystrophy. He used to fall now and then and finally a doctor diagnosed him with the condition.

Recently, Roshan, a Bengaluru-based techie along with his group of friends took an initiative and decided to give him an electric wheelchair which is worth over one lakh rupees. Midhun thought that he can now go outdoors, meet his friends and even travel on his own without being dependent on his family. This youngster and his family stays at Makkarathu Mukku in Vadakara where the roads are filled with potholes, especially after the recent rains.

Electric wheelchairs are made so that we users can become more independent. The day I got my new wheelchair I was excited, and wanted to come back home on it. But as soon as I reached near my home, I realised that going on my wheelchair on pathetic road conditions will never happen. Ever since then, I and my family has been knocking doors of panchayat, public works department officials and politicians. Nothing substantial has been done till date. – Midhun VP, Wheelchair user

It has been over a year and nothing has been done. “Just like other youngsters my age, I want to go out alone. But I am unable to and it is the government’s duty to ensure that public places and roads are made accessible for people with disabilities. This apathy and insensitivity is heart-breaking”, he says.

When Midhun’s plight was covered by a few local media agencies, authorities promised action. Yet, nothing has changed. “No one has even come this side to check condition of the road”, adds Midhun.

With the support of his family, Midhun had started making paper pens which he sells off at to his clients. “My father goes to Kozhikode and buys all products for bulk. If I could move around in my wheelchair, I can do this myself without depending on anyone. But if the authorities are closing their eyes to our plight, what can I do”, he asks. His mother Shantha VP says that they do not have the time or money to file a case against the authorities.

“Over the last few months, we realised that we need political influence in order to get this done. We don’t have that. Even a person without any disabilities finds it hard to walk on these roads. So how can a disabled person use his wheelchair?”, she asks.

The apathy of government officials and politicians are demoralising for this youngster who has big dreams.

ALSO READ: 14 year old Joel Biju has overcome a disability to finish over 1000 paintings in one year