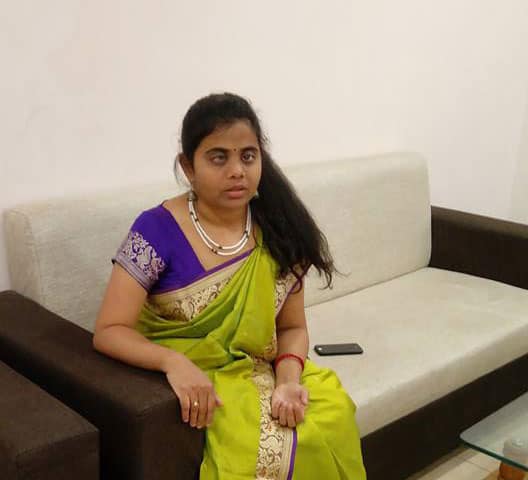 “Never be defeated and.. never give up because with our efforts all of us will get that one breakthrough which we want”. With these words to the gathered media persons, 30-year old Pranjal Patil took charge as Sub Collector of Thiruvananthapuram earlier this week.

Pranjal, who is from Ulhasnagar in Maharashtra, lost her vision when she was just six years old and has made history as India’s first visually impaired woman IAS officer. Pranjal cracked the Union Public Service Commission (UPSC) examination in 2016 with a rank of 773. She improved upon the rank and raised it to 124 in 2017, qualifying for the IAS.

The Thiruvananthapuram appointment is Pranjal’s second, she was Ernakulam Assistant Collector during her training period.
Pranjal, a postgraduate in international relations from the Jawaharlal Nehru University (JNU) said she has clear ideas about what she wants to focus on in her new appointment.

I am feeling extremely glad and proud to take charge. Once I start working, I will have more idea about the sub divisions of the district and can have more plans to what to do for the subdivision. – Pranjal Patil, Sub Collector, Thiruvananthapuram

Retinal detachment in both eyes led to Pranjal losing her vision at the age of eight. “I had high powered glasses since I was a child, and then I lost sight in both my eyes in quick succession”, she told The Indian Express. “Despite that, I was carrying on with my daily activities as usual, and because I was young, it didn’t impact me as such,” she said.

While she did undergo surgeries to reattach the retinas, they were not successful. “When the surgeries were done, I did suffer a lot. The pain did not subside until at least a year after the surgery.”

Pranjal studied at the Kamala Mehta Dadar School for the blind in Mumbai. Being a Marathi medium school, she faced a challenge here but worked hard to overcome these challenges. She then went on to do her graduation in political science at St Xavier’s College in Mumbai where a well-established support system in the form of the Xavier’s Resource Centre for the Visually Challenged helped her.

She did not take any coaching for the UPSC exam as she thought it would put unnecessary pressure on her. She solved mock papers and attended discussions.

It was her exposure to the JNU culture that led Pranjal to think of a career in the civil services. “The vibrant environment of the university taught me to form opinions and ask the right questions; this gave me the courage to be a civil service officer. While I had decided to write the UPSC exam when I was doing my graduate degree, I had made up my mind by the time I was in JNU.”

Pranjal’s tenure will be closely watched by the blind community in Kerala, which is thrilled to have her serve in the state. “Civil services is considered to be one of the topmost positions in India and Pranjal was declined at first because she was visually impaired”, says Husna Ameen, a blind computer trainer based in Thiruvananthapuram. “She waited for a second attempt to come out in flying colours. This shows that nothing is impossible and the extent to which a person can achieve their dreams if they have the will and determination”.