Scaling heights of Mount Kilimanjaro, Neeraj George proves a disability is no barrier to chase dreams 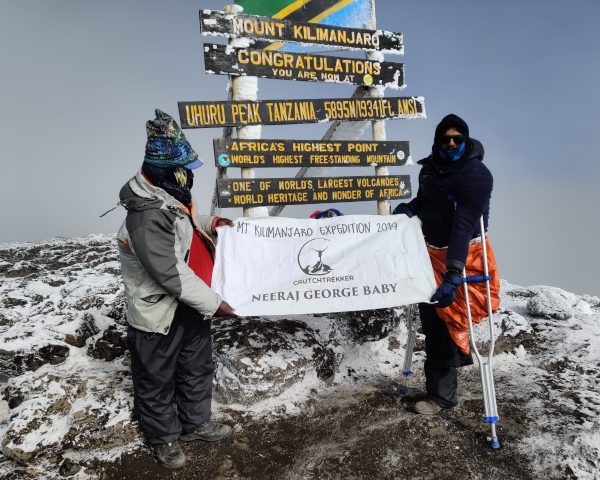 32 year old Neeraj George, who is an amputee, recently climbed Kilimanjaro, Africa’s highest peak. This youngster, who hails from Kochi, went to Tanzania a couple of weeks back and returned back home on 22 October after his successful trek. Neeraj, who is also a para badminton player proves that a disability is never a barrier to achieve one’s dream.

Mount Kilimanjaro is the highest mountain in Africa with its three volcanic zones. One who plans to scale its heights might think twice. But for 32 year old Neeraj George, who hails from Kochi, trekking through one of world’s highest mountains was all about exploring and fun. Being an amputee was no barrier to achieve his dream. Neeraj, who left for Tanzania a couple of weeks back, returned back home on 22 October after scaling Mount Kilimanjaro in seven days. This youngster proves that a disability is no barrier to conquer even mountains.

For Neeraj, who is an ardent trekker, exploring mountains is nothing new. He has already scaled Karnataka’s third highest peak Tadiandamol, Pakshipathalam in Wayanad and Kurinji in Tamil Nadu to name a few. A few months back is when he decided to the other side of the world to explore Mount Kilimanjaro. Neeraj remembers that there were many people to pull him back. But he was determined and confident.

It was almost four months back that I decided to check out Mount Kilimanjaro. I chose it because nature is something that has always awed and inspired me. Moreover, Kilimanjaro has diverse climatic conditions so the challenges were many. As someone who treks often, climbing Kilimanjaro was definitely a different experience for me-Neeraj George.

This youngster scaled 19,341 feet using his crutches proving that nothing is impossible if you have determination and courage. Neeraj was accompanied by his team of friends Chandni Alexander, Paulson Joseph, Akhila, Sijo George and Shyam Gopakumar who made the climb easier and fun.

Neeraj and his team camped in the mountains in extreme weather conditions. “We knew that it was going to rain and it did, especially on the first three days”, remembers Neeraj.

Travelling all the way to Tanzania and exploring the mountains was something that required a lot of money. In fact, Neeraj had to take loan from a bank in order to chase his dream. “Trekking Mount Kilimanjaro was close to my heart, something that I wanted to do since a long time. I took a loan in order to fulfil my dream”, he says.

Neeraj says that he climbed for a cause. He adds, “The government has introduced 5% taxes and GST to accessibility goods including wheelchairs. They are giving many reasons for it as well. So my latest expedition comes with a cause to waive off these extra taxes. This is a request to the government from my part.

After his return, Neeraj was flooded with congratulatory messages and wishes on social media platforms.“Congrats Neeraj George.
You have proved once again that disability is just a word and you can achieve just about anything with your will power. This time you went on to conquer the tallest mountain in Africa, Mount Kilimanjaro”, says Anupama Sandeep.

“This is my friend Neeraj George who scaled the Mount Kilimanjaro. I am so proud of you brother. Keep it going”, says Vinayak Muraleedharan.

Neeraj lost his limb to a cancerous tumour in the age of nine. But a disability only made him stronger. This youngster, who is also a para badminton player, has won many national and international accolades as well.