My Search for an Accessible Venue in Delhi – Chayanika Iyer, Rising Flame 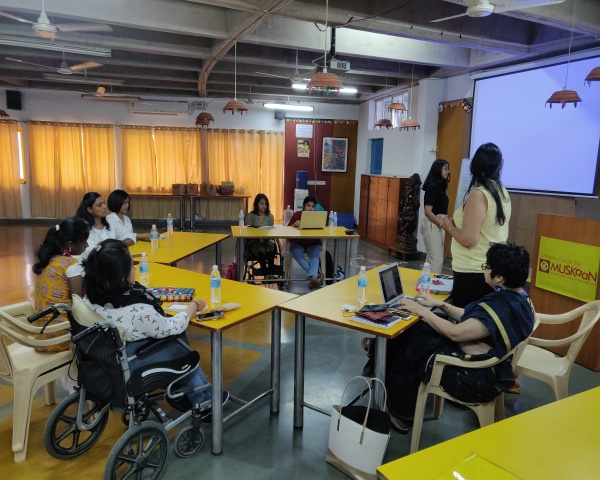 A part-time Programs Coordinator, Chayanika Iyer is currently pursuing her MA in Sociology from Jawaharlal Nehru University and hopes to work at the intersection of accessibility, queer rights, and peace and conflict studies.

I remember just writing down in my to-do list, look for an accessible venue. Little did I imagine what that search would look like. It just seemed obvious that in the capital city of the country, it wouldn’t be so hard to find an accessible venue. But the search that began in August went all the way to the first week of September – by which time we were frustrated and ready to give up.

We started by looking at venues near the hotel we were staying at. Venues that either advertised themselves as wheelchair accessible, or declared themselves as accessible very enthusiastically when I called to enquire. We were looking at meeting halls, classrooms of different NGOs, presentation rooms at youth centres, co-working spaces, even smaller banquet halls in hotels – any place where our small group of fellows and trainers (roughly 10 of us) could learn comfortably.

After the first few calls (and subsequent visits), I started noticing a pattern emerge: I would be told that a certain venue is accessible very enthusiastically, but each time I actually visited the venue, they were either completely or partially inaccessible. There was almost always an issue with either the ramp or the washroom, or sometimes both, at all venues.

First off, the reason why most venues described themselves as accessible was because they either had a ramp (but no appropriate washrooms), or because they understood “accessibility” to mean centrally located, easy to get to, or near the metro. Until a wheelchair was mentioned, accessibility was not interpreted in terms of disability at all. Venues that were accessible were usually either already booked months in advance and unavailable, or priced higher than places that weren’t. Mostly a lot more than our assigned budget. We had to consider even stretching our budget for a while, but then again the accessibility of such spaces can be questioned since a lack of sufficient funds to consider that as an option would mean that these venues would have remained inaccessible to us.

Some places didn’t even have a ramp for the main entrance, and those places that did, it was usually quite cumbersome to get to. Ramp entrances were often hidden or tucked away at the back entrance. Almost as if it was a pointed effort to render wheelchair users invisible, while also basically creating an obstacle course for people who would want to enter that way. One particular “accessible” route to a meeting room that has remained with me began with a lift journey, involved a game of hide and seek (as I searched for a very unassuming terrace door), and finally ended with a “ramp” which was actually a precarious bridge connecting two buildings. It was terrifying to cross the first time even when I was being carefully lead by an attendant – there was no way we could have crossed it independently multiple times a day during our trainings. This is what we essentially would have had to do because the only accessible washroom at that venue was at the other end of the building.

There was also little to no understanding of what an accessible washroom meant. When elaborately described, I was often corrected by a chorus of “oh you mean a handicapped washroom!” which was quite jarring and deeply unsettling. A lot of venues also had a ramp at the entrance, but stairs leading to the entrance of the washroom. Essentially it meant everything could be accessible within the washroom but the washroom itself was not accessible.

I often witnessed a sense of surprise on people’s faces when I asked them these questions. It was as if these were fancy requests. I was made to feel like I was asking for too much or being unreasonable. Some of them even tried to get me to empathise with them, as if I – person who is visibly not a wheelchair user – was supposed to be in on some consensus with them and understand that these things aren’t supposed to be their responsibility to include at their spaces. “You get it, right? Where are such washrooms available nowadays anyway!”

Finally, Muskaan an NGO lent us their space, and we are very grateful for their support both before and during our training sessions. However, this does not take away from the fact that finding an accessible space was so difficult in the nation’s capital, at a time when we speak a lot about accessible India. I shudder to think what the situation is like in cities where even conversations around accessibility are just starting and that too, only within certain sections and communities. Since being involved in this search I’ve definitely become more conscious of the lack of accessibility every time I’m in a public space. This lack of access needs to be questioned over and over and addressed urgently. Until those in positions of authority no longer consider ensuring access needs as an unnecessary burden or an added benefit.