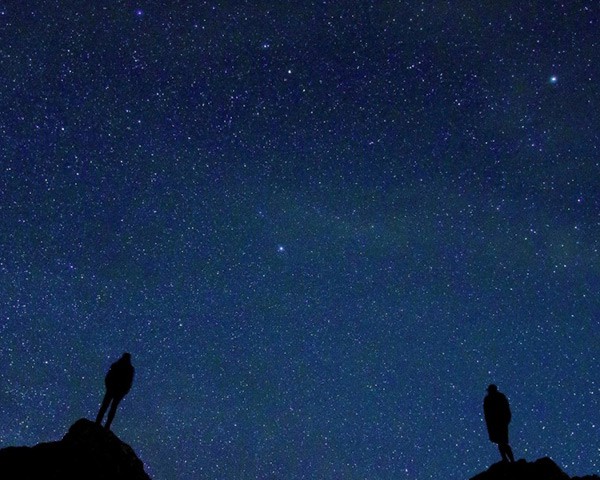 The night sky with the many stars and constellations is beautiful to witness and bringing that experience alive for blind and low vision people is a show at the British Science Festival called A Dark Tour of the Universe.

The deep space is mysterious and beautiful and bringing that alive for blind and low vision people is a new show at the British Science Festival currently on at the University of Warwick.

Called A Dark Tour of the Universe, the show is a collaboration between Chris Harrison, Fellow, European Southern Observatory (ESO) and Dr Nicolas Boone, a visually impaired astronomer at the University of Portsmouth.

The show offers a tactile experience of the universe by using 3D models of astronomical images and the non-speech audio of real astronomical datasets. Sighted visitors will be encouraged to witness the show blindfolded.

Born in Australia, Dr Bonne dreamed of becoming an astronomer ever since he was a little boy. In an interview in the Institute of Cosmology and Gravitation newsletter, he said:

I’ve had my eye condition from birth, and I decided that I wanted to be an astronomer at the very young age of 5. My parents and teachers were pretty supportive and they did everything that they could to help me learn about what is fundamentally a very visual science. This wasn’t always easy though, and this was often due to limited accessible astronomy resources for people with vision impairments. In astronomy books and TV shows, whenever anybody wants to talk about how awe inspiring the Universe is, they tend to show beautiful pictures of space to make their point. I wanted to make something that could help to inspire and teach people in the same way, regardless of whether they can see or not. – Dr Nicolas Bonne, Institute of Cosmology and Gravitation, University of Portsmouth

Dr Bonne leads The Tactile Universe, an award-winning public engagement project at the Institute of Cosmology and Gravitation, University of Portsmouth, that is making astrophysics research accessible to people with vision impairments. The project focuses on children between the ages of nine to 14. It involves a series of 3D printed images of galaxies that allow blind and visually impaired children to ‘see’ the Universe by feeling the shapes of these astronomical objects. It is now available throughout Britain, for schools and others to engage with science.

The A Dark Tour of the Universe show will eventually be made publicly available, so people can listen to space from computers and tablets at home.“We wanted to find new ways of opening up the drama and majesty of space to a wider audience”, said Dr Bonne.

In A Dark Tour of the Universe, the brightness of stars’, colour and position in the sky are all reimagined as volume, with louder sounds for brighter stars, and tone to indicate colour. Use of surround sound ensures the position of stars is captured.

Using real data of position, magnitudes and colours of stars, a beautiful surround-sound effect is created, allowing the audience to listen to the stars appear. Show highlights include listening to variable stars or to galaxies merging and feeling 3D models of the first picture of a black hole and the 360-degree panoramic image of the Milky Way. James Reevell, a musician and teacher, has created all the music for the show.

Vineet Saraiwala, an avid marathoner who spends a lot of time outdoors, has vivid memories of the time spent watching the night sky before he started losing his vision. “It has been ages since I have seen the twinkling stars in the sky and I leave it to my imagination to visualise the sky.” An experience like A Dark Tour, he says would be something quite wonderful. “Sometimes fellow companions describe it to me during cycling but it would really be wonderful to see it yourself.”