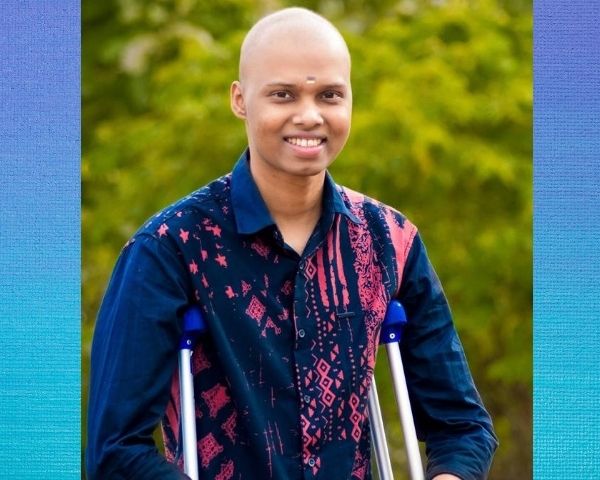 Nandu Mahadeva, a 26-year-old from Kerala, was diagnosed with bone cancer and had to amputate his left leg in the year 2018. Nandu was in dire need of funds for his cancer treatment and started crowd funding. In 12 hours, he received Rs 50 lakh which Nandu, also founder of ‘Athijeevanam’ that supports cancer patients, plans to use for his own treatment and for other cancer fighters too.

For social media users in Kerala, 26-year-old Nandu Mahadeva needs no introduction. This youngster who is a popular name on social media had to amputate his left leg a couple of years back after being diagnosed with a bone tumor. But he rose like a phoenix to help himself and many others like him.

Recently, Nandu shared an emotional post on Facebook thanking all kind-hearted souls who contributed over ₹ 50 lakh in just 12 hours towards his crowd-funding initiative for cancer treatment. With this money Nandu hopes to fund for his treatment and for many other cancer patients who are struggling to make ends meet.

A powerhouse of positivity

Everything was going perfectly smooth in Nandu’s life until fate struck him in the year 2018. Nandu was diagnosed with bone cancer. During that time, he was pursuing his BBA studies and also ran a food catering business with his friends. Not only did he have to drop all his dreams, but he was also in dire search of funds for his treatment since his family could not support him.

He completed a few surgeries including amputation of his left leg. Though he had initially lost all hopes in life, Nandu slowly started getting back to his feet, but this time with lots of positivity and hopes. He was also determined to help many others like him. His social media posts that were inspiring and motivating became a hit amongst his followers. People started sharing them widely.

‘Enough. Enough. I’am overwhelmed by the love and affection you have showered on me’, begins his post. ‘I’am surprised. Even during these Corona times, you all gathered Rs 50 lakh in just 12 hours for me. If I keep quiet now, I know the money would still keep coming. I did not post this to get a lot of money, but I wanted help when I couldn’t go ahead anymore’, he further adds. In the post, he also adds details about how he plans to reach out to others who are fighting cancer and help them with financial support with the money earned from crowd-funding.

Though doctors told him he might not live long due to his illness, this youngster is looking at the face of adversities and smiling at them. Nandu, who is also the founder of ‘Athijeevanam’ that supports cancer patients, hopes to do his best in days to come. His posts about the love and support received from his family members, especially mother, have won hearts on Facebook.

Talking to Newz Hook, Nandu says, “I’am extremely thrilled and happy now. I realised the love that people have been showering on me. I also got a lot of messages in my Facebook Inbox saying that they are unable to send me money due to their financial constraints during these tough times. That is what prompted me to post saying that the funds are enough because I realised that people are sending in money in spite of their personal difficulties”, says Nandu. He adds, “There are many cancer fighters who are struggling for food, transport etc. So through the funds that I received, I shall help them all”.

Nandu is sharing the funds in the name of ‘Nandu’s Koottukar‘ which means friends in Malayalam. “It is my friends who helped me get the money to help the many cancer fighters”, he says with a smile.