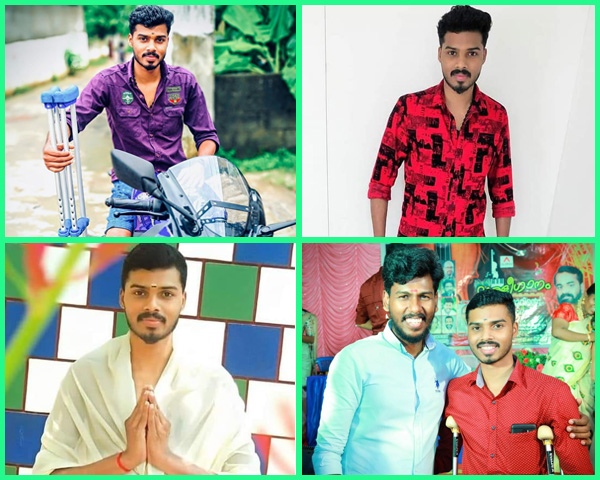 26 year old Nandu Mahadeva from Trivandrum in Kerala had to amputate his left leg after being diagnosed with tumour. After a year, doctors confirmed that his tumour had spread to the lungs and it was a near death experience for Nandu. After his successful surgery, Nandu has come out to inspire many others who have cancer. His posts and photos on social media are popular and has made him a social media sensation amongst youngsters in Kerala.

“When you are living the best version of yourself, you inspire others to live the best versions of themselves”. This quote from Steve Maraboli inspired 26 year old Nandu Mahadeva from Kerala to live life to the fullest and reach out for others. Nandu was diagnosed with bone tumour a couple of years back after which he had to amputate his left leg. For a youngster of his age who was living life to the fullest, an amputation came as a huge shock. But Nandu gathered all the broken pieces to start afresh. His inspiring posts and photos on social media has made him a rising star amongst youngsters in Kerala.

Before his diagnoses, Nandu was active in sports and loved spending time with his friends. Together, they even started a catering business venture. He was doing his graduation in BBA and earning quite well too. But fate had other plans for him. On 1 April 2018, he was diagnosed with a tumour.

When people hear about cancer and tumour, they are obviously shocked and depressed. Nobody thinks that it will happen to them. I looked up Google only to become more disheartened because I saw only negative things online. That is when I decided to change that image and create something positive. I have always been a positive person since childhood-Nandu Mahadeva.

After an amputation, Nandu thought that things would get better. Recently, he had breathing issues and consulted a doctor who confirmed that the cancer had spread to his lungs as well. This called for an immediate surgery which was quite expensive. Since his family couldn’t afford a huge amount at a short time span, Nandu’s friends turned to social media. Popular RJ Firoz spoke about Nandu on his radio show after which they managed to collect the funds for his surgery. “That is when I realised that there are so many good people around me. People whom I don’t even know lend me a helping hand in successfully completing my surgery. I had thought that I was dead. But this is indeed a second life for me and I want to reach out to as many people as possible”, says Nandu.

“People think that a person can recover from cancer only if they are rich because a lot of money is involved in the treatment. So even if a person survives for five years, they spend the worst time of their lives thinking about the disease. I feel you must live life to the fullest. You can survive any obstacles if you are positive about it”, says Nandu.

For this youngster, his parents and siblings are the biggest pillars of support. Nandu says, “We always look into ways to become sad. After being an amputee, I have come out stronger and can do things which I thought I never will. After a disability or cancer diagnosis, people confine to the four walls of their homes. There is so much to explore and see in this world”.

Nandu’s Facebook posts are always flooded with comments praising his determination and courage. “We are waiting for your return full-fledged because ‘Athijeevanam’, the venture that you started has to be taken forward”, comments Sandeep KP.

‘Hope you rise like a phoenix bird for years to come”, commented Keerthi Rajesh Nediyanthala.