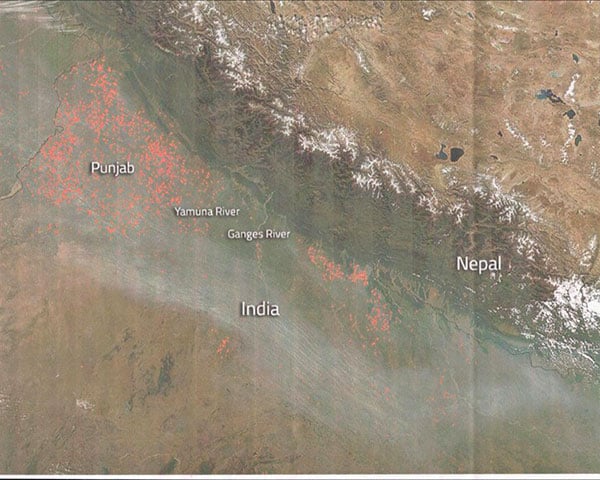 One of the worst crisis faced today across the world is environmental pollution. The national capital of India, New Delhi, has been reported to be one of the most polluted cities in the world. The Delhi government on Tuesday shared an image of American space agency NASA showing intense stubble burning in adjoining cities of New Delhi adding to the pollution woes. This is not the first time that NASA has shared images of pollution owing to stubble burning in the capital city. Many people took to social media to share the image.

Reportedly, pollution levels in New Delhi on Tuesday was said to be extremely low. According to lawmakers, stubble burning is at its peak during October-November. With Diwali round the corner and people gearing up to burst firecrackers, pollution levels are only expected to rise which can lead to many health hazards.

Stubble burning is a practice of clearing the fields after harvest time. This happens mostly in rural areas of Haryana and Punjab, which lies close to New Delhi. Over the years, it has been noticed that this can cause harmful and toxic effects to the environment. Till date, no strict laws have been introduced to curb this practice. “Latest NASA image of North India reveals dangerous levels of large-scale crop residue burning, which has the potential to pose a great health hazard to citizens of Delhi #airpollution #DelhiGovernance”, tweeted Roshan Shankar.