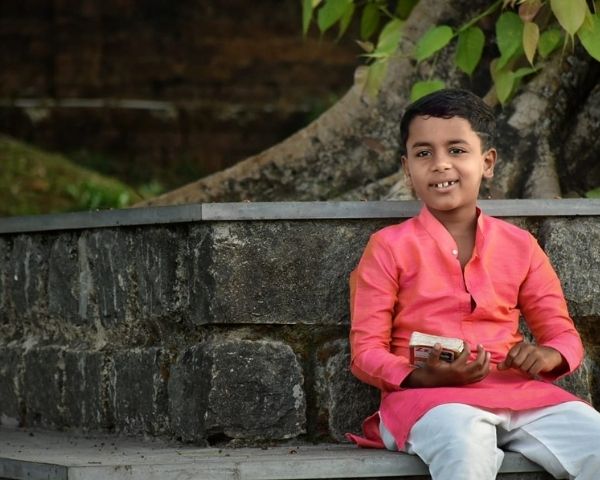 In our monthly campaign #FutureChamps, today we have eleven-year-old Nayan from Trivandrum. Diagnosed with autism, Nayan has authored two books, directed a short film, does mind-reading and has won numerous awards. Read on to more about his remarkable journey.

Until the age of one and half, Nayan grew up like any other kid. But then he became non-verbal and his development was gradually affected. Upon detailed checks, Nayan was diagnosed with autism. His mother Priyanka was determined on giving nothing lesser than the best for Nayan who now excels in many fields. Nayan’s journey as an author, mind-reader and short film director will motivate not just children, but adults too.

All those who have closely interacted with Nayan would term him as a ‘miracle kid’. They have reasons. He has sensory issues and is non-verbal. A student of class 5 now, Nayan does not shine bright academically, but has a handful of talents and excels in fields that he has chosen.

At the age of seven, he wrote his first book ‘Journey of my soul’ which comprised mostly of short stories and poems. The book was launched by state education minister C Raveendranath who lauded Nayan’s efforts. This was in the year 2017. The book also got a special award from the prestigious Kerala Sahitya Akademi.

His second book ‘Fine Universe’ was published a year later and was launched by then Kerala governor P Sathasivam who only had good words about Nayan’s writing skills.

‘Incredible Book of Records’ tested Nayan’s abilities and awarded him the world’s youngest autistic child philosopher award in the year 2018. Nayan also has proved his skills in telepathy. Yoga and swimming is what keeps him engaged most of the time. It has also helped improve his motor skills.

At age of seven, Nayan scripted and directed a short film ‘Rise Autism’ which is about his own life. His short film ‘Silent in mobile’ won award from the Cochin Film Society.

Currently, Nayan claims to know 15 Indian languages and 5 foreign languages though he cannot speak them because he is non-verbal.

Nayan hardly used to communicate until he got a laptop of his own at the age of seven. Not only did communication become easier, Nayan could experiment and explore new things with the help of the gadget.

Needless to say, the relentless support given to Nayan by his parents and sister is what helped him flourish. Priyanka says, “When Nayan was diagnosed with autism, I only had a vague idea about what the disability meant. Upon research, I understood therapies are important. I started providing him that at a young age which was one of the best decisions”.

In fact, Nayan and Priyanka have moved to different cities in Kerala looking for the right therapies and professionals. But Priyanka says those tough days were worth it. According to her, during all these years, Nayan did not have newspaper or even TV. So his knowledge is without any of these exposures.

The family currently stays in Trivandrum. “His interests keep changing. Now he says he is interested in spiritual philosophy. But philosophy was always his area of interest”, says Priyanka.

“Most parents who have a child with autism believes that the child cannot do anything. But that is wrong. They often forget to identify the child’s strengths. The child will definitely have some talent and skills which their parents can be proud of. Kids with autism have no social skills. They need immense support thousand times more than what you could give your child without a disability”, she says.