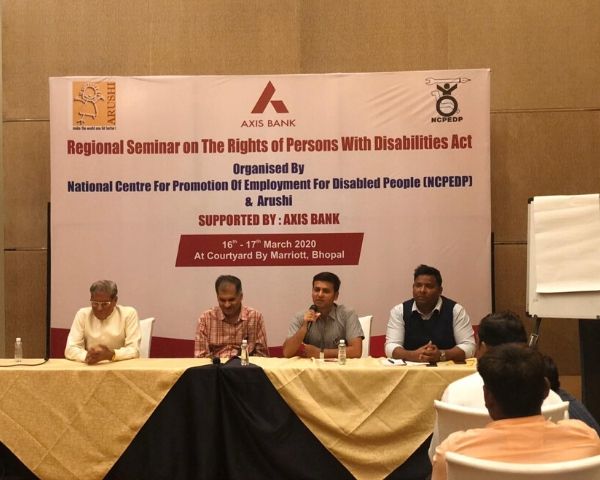 The National Centre for Promotion of Employment for Disabled People, India’s apex body representing the rights and interests of persons with disabilities, organised a state-level seminar in partnership with Arushi, an NGO working for the rights of disabled people in Bhopal. The aim of these state-level events is to spread awareness about the finer points of the Rights of People with Disabilities Act 2016.

Over four years after the Act came into force, implementation remains piecemeal. Some states in India have been proactive in ensuring some of its provisions are translated into action, most have shown apathy. Many in the disabled community, including organisations working in the states are unaware of the provisions of the Act.

A scenario, the National Centre for Promotion of Employment for Disabled People (NCPEDP), which is the apex body representing the rights and issues of India’s disabled community, is trying to change through state-level seminars. One such seminar was held in Madhya Pradesh capital Bhopal, which saw the presence of over 100 disabled people’s organisations (DPOs) from different districts of not only Madhya Pradesh but also Chhattisgarh.

It is crucial to create awareness about the provisions under the newly enacted law and the various developments that have taken place under it. State level implementation of the RPWD Act 2016 is important as disability is considered a state subject. The Act acknowledges 21 categories of disabilities and looks at disabilities as a mainstream human rights issue. Unfortunately implementation of this Act varies across states. – Arman Ali, Executive Director, National Centre for Promotion of Employment for Disabled People

Among those present at the Bhopal seminar was Krishna Gopal Tiwari, Social Justice and Disabled Welfare Department, Government of Madhya Pradesh, who emphasised the need for inclusive education. “The RPWD Act 2016 focuses on the all-round development of persons with disabilities and hence it becomes more important to have awareness on the same. While special schools are important much emphasis should be laid on inclusive education for children with disabilities.”

Calling the Act a game changer, Arman said there was a need for all government departments to come together. “The new RPWD Act is a game changer as it holds the private sector accountable as well. The responsibility of implementing it should not be solely on the Social Welfare Department and needs to include other departments like education, health as well”.

State government officials also talked about the status of the Act in Madhya Pradesh. Sunil Sharma, Assistant Director, Social Justice and Disabled Welfare Department said district-level committees had been formed in 50 of the state’s 52 districts. However, no disabled person was a part of these committees. Special judges and special courts have been notified in some of them. “With regards to accessibility, the process of making public buildings accessible is still underway while in terms of web accessibility, all government websites have been made accessible,” he added.