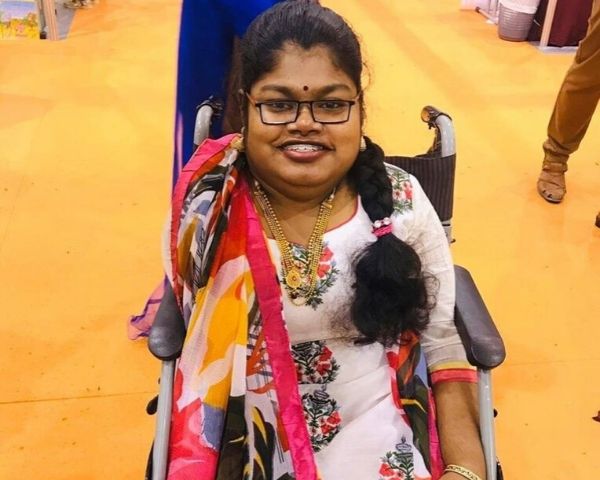 Neha D Thampan, 18 years old, from Trivandrum in Kerala is a degree second year student in English Literature. Neha was diagnosed with cervical compression when she was ten years old, but before that doctors mistook her condition for cererbal palsy. Neha started writing since childhood and has published over five books of her poems. This youngster believes that nothing is impossible and is determined to beat any obstacles that comes ahead of her.

Neha D Thampan believes in making the best out of life. The many hardships and roadblocks ahead of her doesn’t matter. This 18-year-old from Trivandrum has published five books already, of her beautiful poetry. In spite of being diagnosed with cervical compression and then later years of struggle, Neha is determined to make the best out of each day. She believes nothing is impossible and a strong mind is what helps a person move ahead in life.

Neha did her schooling at Cotton Hill, one of the most prominent schools in Trivandrum. She had all the support from her friends, peers and teachers. But Neha’s mother used to accompany her to school, a routine which helped Neha a lot.

No schools were willing to accept me due to a disability. They all rejected and my mother had almost gave up. She told me that no matter what, she will educate me from home. Her last try was Cotton Hill, and they readily accepted me.

Neha started using a wheelchair when she was in class 9. She is currently pursuing her second year under-graduation in English Literature at Mar Ivanios College in the state capital.

Neha remembers that she was an ardent fan of writing since childhood. So when she used to get free time, even while in class, she used to scribble down her thoughts as poetry. When she was in class 4, a short film was made on her life. In the film, there was a scene where she was releasing a book.

“To my surprise, the director had already compiled few of my poems and made it into a book. So for the short film, I released my first book. It happened unexpectedly”, she says.
In class 5, she released her book ‘Mazhathullikal, in class 8, ‘Chayangal’ and class 12, ‘Marupacha’, all of which did really well. The last two books that she released were published in Amazon Kindle!

“I could start writing because my family was very supportive. Both my maternal and paternal grandfathers were writers too. My father is a film director, so we are inclined to art as a family”, she says.

Neha does not believe in limitations. She remembers that recently a person with disability messaged her on Facebook saying that he wanted to end his life because he is tired confining himself to the four walls of his house. “There is so much out there to explore. So why would people want to stay indoors? Only when you come out will you know what is there in store for you”, she says.

Neha’s biggest pillar is her mother Jaya VS. She says, “I have never differentiated my child as an abled or disabled kid. I always stood by her to appreciate and identify her talents”.