“Next goal is to swim the Strait of Gibralter” – My Take by Satendra Singh, para swimmer 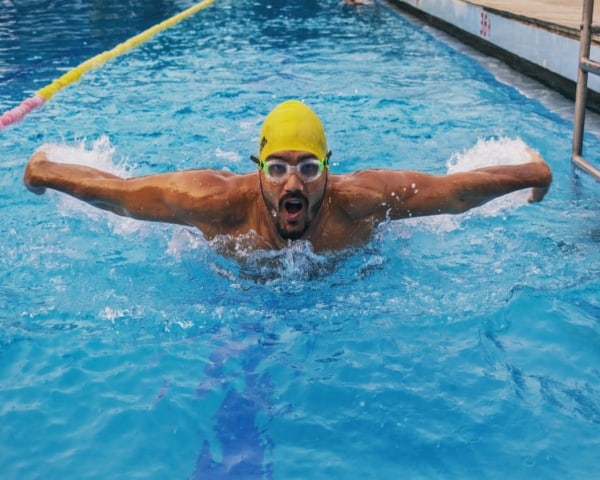 Six days after he and his team members successfully swam the Catalina Channel, para swimming champ Satendra Singh talks to NewzHook about the third challenge they have set sights on.

The idea of completing the Ocean Seven Swimming Challenge first came to me in 2014. I had won the Vikram Award that year, which is the highest sporting award given by the Madhya Pradesh government and I was looking for a goal to work towards.

I had just read about Philippe Croizon, the French athlete who had become the first quadruple amputee to swim the English Channel. Philippe does not have hands and feet and I was inspired by him. I had no idea then how tough the English Channel was and I started reading up.

That was just a germ of an idea and I discussed it with a few para swimmers I knew well. These were people I had met during short distance swimming events and we were comfortable with each other. Getting sponsorship was a major challenge, however. Everywhere I went, I was asked, ‘How will you do this as a disabled person?’ I told everyone the same thing – “Give me a chance and don’t see my disability alone”.

After much hardship, I found support from P Narhari, who is the Commissioner-cum-Secretary, Urban Administration, Government of Madhya Pradesh. He has been a mentor to me. With his help, I attempted the English Channel but was unsuccessful the first time. But I did not give up. I prepared again with my partners and we met with success the second time.

That boosted our morale and we decided to attempt the Ocean Seven Swimming Marathon, which is a swimming marathon of seven channel swims. We thought why not set a world record as the first para swimmers to do this? I was convinced that if we made up our mind, all the barriers would fall down and we would form the connections needed to make this a success.

None of the swims have been easy. Everyone says the English Channel is the toughest as the waters are cold and the winds rough. But Catalina Channel has sharks and jellyfish with fatal stings. Sea swimming is dangerous, wherever you are. If anything happens, its all on you. But I strongly believe that if you are doing the right things, nothing can go wrong.

Swimming in a group has its own set of challenges. Coordination is key when you swim together and that does not always happen. You have to take everyone together. The great thing about it is also that we motivate, inspire and challenge each other. And we work as a team, a family. In our world, we don’t believe we are disabled or have challenges or face barriers. We are happy together.

Our next goal is to swim the Strait of Gibralter, connecting the Atlantic Ocean to the Mediterranean Sea. The strait separates Spain in Europe from Morocco in Africa and is about 15 kilometres. This is a busy shipping lane with lots of container ships and only one cross per day is allowed. People can do it solo or as a relay.
We plan to do this solo on separate days, but we will all travel there together. There are no sharks in this stretch, but the current from the Atlantic is so strong that swimmers end up swimming much farther. Also, the water is very bitter, so many swimmers feel nauseous and even start vomiting. We plan to start preparing for this challenge in a few months. As things stand, we plan to attempt it next year. I am sure that we will be successful if we stay determined like we have been so far.

For the moment I am busy preparing for the national championship in Bhopal later this year. My philosophy is that win or lose, one must keep trying and it is this that changes your life.