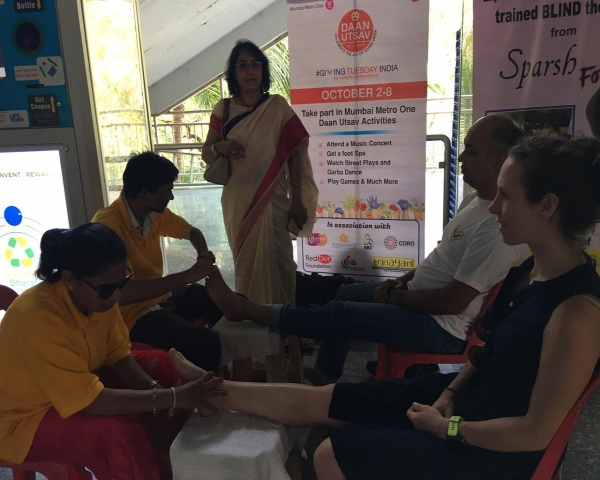 From plastics free India to organ donation the 11th edition of #DaanUtsav, one of India’s largest volunteer driven philanthropic initiatives, saw homemakers, corporates, students and people with disabilities come together to support a range of causes. Among the organisations that was a part of the #JoyofGiving week this year was Trinayani, the well-known cross disability advocacy NGO based in Mumbai.

For a week, starting 2 October, Mumbai Metro commuters at the D N Nagar Metro Station had the opportunity to directly engage with people with disabilities at a counter set up by NGO Trinayani as part of the Daan Utsav’s #JoyOf Giving Week celebrations.

From a 15-minute massage by blind therapists to a walk around the #LETSTALK sculpture exhibit to understand the world of deaf blind people, the attempt was to trigger conversations about disability with larger audiences.

#LETS TALK is a sculpture created by a deaf blind and a non disabled person and this attracted a lot of attention. Many people were curious about the signed alphabets that form a part of it. The blind massage spas actually picked up later after the first two days. We knew there may be issues given that people are rushing either to work or back home but we got a volunteer later who actually went out and engaged with commuters making them feel comfortable, which led to a surge in visitors. – Ritika Sahni, Founder, NGO Trinayani

Through the week, there were a range of events held by Trinayani around the theme of disability. One of the most popular was a performance by inclusive music band Pehli Baarish. “A lot of people stood by and heard us sing and it was a lot of fun”, adds Ritika.

Mumbai Metro authorities went all out with the messaging as well. Ritika’s film on the upcoming Census exercise called Count Me In was played on all the trains. The film looks ahead to Census 2021 and emphasises the need to ensure that people with disabilities are included in the exercise. India has lower reported instances of disability than most other countries, which means policy action is not as effective.

“The film in Hindi puts forth the message , ‘do not hide disabled people, see to it that they are counted’, says Ritika, who says the #JoyOfGiving week was a good opportunity to push the message out.

“Mumbai Metro wanted to pick the theme of women’s empowerment and Trinayani is an NGO that looks at issues related to disabled women”, explains Pushpa. “The response to the massage spa was great and it is great to celebrate this in a public space. With so many lakhs of people taking the Metro, this brings great visibility taking the experience to where people already are”.

Also Read: These blind massage therapists can heal your knots with their touch