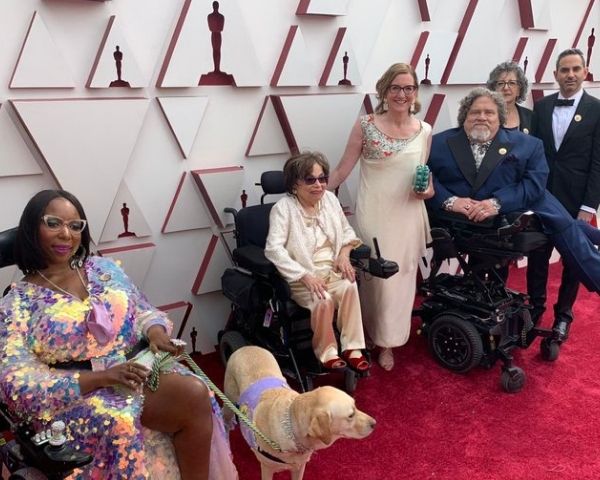 With three team members on wheelchairs, one accompanied by a service dog, the much talked about Crip Camp made a strong statement for disability inclusion on the Oscars Red Carpet in the 2021 Academy Awards. The documentary tells the story of Camp Jened, a summer retreat in the Catskills where many young people with disabilities experienced the joys of community from 1951 to 1977.

“We’re on the red carpet! #Oscars,” Crip Camp’s official Twitter account said proudly. “Sending hope & gratitude to my friends on the #CripCamp team today!,” tweeted “Crip Camp” writer David Radcliff, who has cerebral palsy and uses a wheelchair. “No matter what #Oscars bring, I hope this is a tipping point after which seeing disabled people at awards doesn’t seem so revolutionary. Thank you for all the work you’ve done & the doors you have helped to open.”

And Crip Camp has indeed opened doors. It may have lost out in the Best Documentary Oscar category but the nomination clearly led to a major push for disability inclusion in the awards ceremony. For the first time an accessible stage was created and there was captioning for the broadcast as well.

Spotlight on movies on disability

The greater emphasis on disability inclusion was evident all around. A Google commercial during the 2021 Oscars generated nearly as much attention as the nominees. This was a Google ad featuring a pair of grandparents who are deaf using various pieces of technology to communicate amid the pandemic.

As a CODA, or “child of deaf adults,” Googler Tony has always shared a unique bond with his parents. But when the pandemic forced a physical distance between them, they found new ways — and a new reason — to stay close. 🤟 pic.twitter.com/ZPrauhIRbc

“Thank you so much @Google for featuring this story during the @Oscars2021Live_ about a CODA (Child of Deaf Adult),” was one of the tweets. “I absolutely loved the inclusion of the grandson signing “more” when he was eating. Sign language at its finest! #Google #Oscars2021 #inclusion.”

Among the movies on disability nominated for the top awards was Sound of Metal, which was in the running for best picture. The film has a disabled character in the lead played by Asian American actor Riz Ahmed, who learned sign language to enact the part of a drummer facing hearing loss. “I just felt like it would be offensive to kind of pretend to know how to sign. I felt like I needed to learn,” said Ahmed in an interview. Sound of Metal is captioned so that both the hearing and deaf communities can experience the film together.

Ahmed’s co-star Paul Raci, nominated for best supporting actor, also came in for praise for his authentic use of sign language during a Red Carpet interview. Raci, who is a child of deaf adults (CODA) plays one of the disabled characters in Sound of Metal.

Watch the Sound of Metal trailer:

Among the movies on disability in the limelight is suspense thriller Run. The film stands out for its compelling plot and debut performance by disabled actor Keira Allen. Allen, who started using a wheelchair six years ago, plays the central role in Run. “I was definitely nervous and feeling a bit of the pressure of playing a lead role in my first ever movie,” she said in an interview.

Robert Tarrango, a disabled actor, was also in the spotlight for his debut film Feeling Through, which was nominated for Best Live Action Short Film. Tarrango is the first deaf blind actor to play a leading role in a film. Incidentally Feeling Through is executive-produced by Marlee Matlin, who made history as the first deaf actor to win an Oscar for the film Children of a Lesser God, among the most widely acclaimed movies on disability set in a deaf school. Thirty-four years later, Matlin was brought on as an American Sign Language interpreter and her presenting the award for Best Documentary Feature in sign language was one of the highlights from the evening.

Animated movies too showed more disability inclusion in their storylines. The Disney-Pixar short film Loop features the first non-verbal leading character with autism. The film centres around two kids at canoe camp who find themselves adrift on a lake, unable to move forward until they find a new way to connect and see the world through each other’s eyes.

Over the years the Academy has come under pressure for greater race and gender inclusion. Not enough emphasis has been laid on disabled actors and disabled characters in that discussion. Hopefully, this year is a sign of a change in thinking.

“It’s time that people need to recognise that diversity should include the disabled, the deaf-blind and the deaf community,” said Maitlin at the ceremony, through a translator. “I hope that it’s not just the flavour of the year, that it goes beyond, and that this is a trend that will continue.”