This lockdown period, Team ‘Chaya’ has come up with a short film titled ‘Pangodan and Sons’ 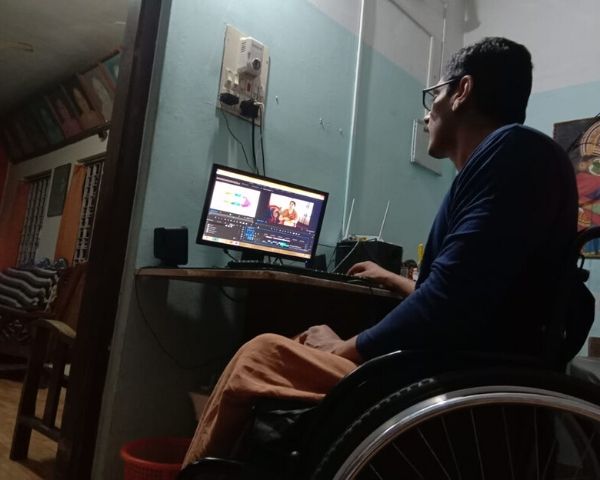 Malayalam short film ‘Pangodan and Sons’ was created by members of ‘Chaya’ theatre group, a team of wheelchair users. The short film was released on Facebook last Saturday by renowned Malayalam film director Vinayan. The team is excited after getting good responses for their performances.

The lockdown that began on 24 March is still ongoing. Many people have lost their jobs, while some others are striving hard to make ends meet. But for a majority of people, the lockdown has been mostly about boredom of lack of activities that they could have pursued otherwise. A team of wheelchair users from Kerala are not letting the boredom kick in. Over ten wheelchair users, who are part of the ‘Chaya’ theatre group, recently made a short film titled ‘Pangodan and Sons’. Their exclusive work is now gathering a lot of attention in various platforms on social media.

Creating a short film from inside the comfort of homes

‘Pangodan and Sons’ was released on the Facebook page of leading Malayalam film director Vinayan on 9 May at 11 am. The director praised performances the performances too.

All the actors who are part of the short film are members of the Thanal Paraplegic Patients Welfare Society, an NGO that works towards empowering people with spinal cord injuries. Last year, the team created a theatre group called ‘Chaya’. They performed at various venues across Kerala. In fact, ‘Chaya’ became India’s first theatre troupe with only wheelchair users as performers!

“One of our team members Sarath came up with the idea for content of the short film. We created a script and shot it in two to three days. All our actors performed from inside their homes. The video was edited by me and later shared on social media by all of us. We did face technical issues like lighting and so on. But this was a learning curve for us”, says Unni.

The story of >‘Pangodan and Sons’ is inspired by the plot of their drama ‘Chaya’. All the actors have played their part beautifully.

The human race is currently going through one of the biggest battles in the fight against Corona. Many places are leading in the forefront in this battle. Kerala, the southern state of India has received worldwide appreciation for their unique battle against the virus. ‘Pangodan and Sons’ highlights that.

“Earlier, we were all relishing junk food. We forgot traditional foods like jackfruit and mangoes which are healthy and tasty. Now, after the lockdown, we have gone back to our roots. This is where we came from. Rest everything else is temporary. We are enjoying times like how it used to be earlier. Even our food habits have changed. We also got help of health care officials and policemen to tackle the tough times. ‘Pangodan and Sons’ highlights all that”, says Sarath Padipura, another member.

Anjurani Joy who did an important part in the film says, “We have been getting good responses ever since the short film was released. This is encouraging. We will definitely look into creating more such unique ventures in days to come”.

Team ‘Chaya’ is now looking into other activities that can keep their fans entertained during this lockdown period!