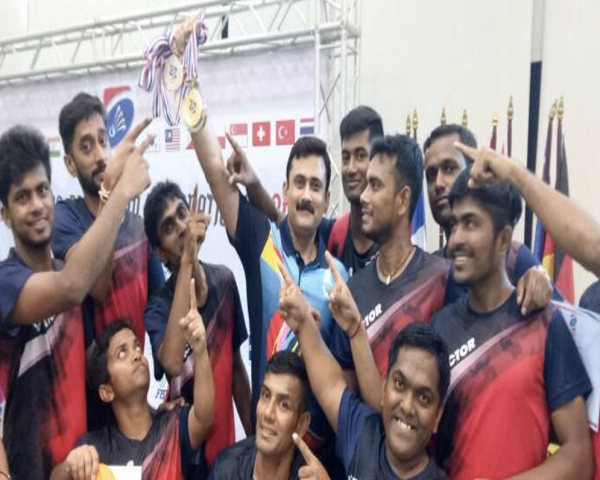 Huge honour for para badminton player Pramod Bhagat who has been awarded the Arjuna Award for 2019. Pramod, who is from Odisha, has been performing consistently well at all international events. But the para badminton fraternity is questioning why their head coach, Gaurav Khanna, widely credited for India’s success in the game, has not been honoured.

With over 240 medals over four years in national and international events, India is now a presence to be reckoned with on the para badminton scene. A remarkable achievement in such a short span of time with para shuttlers like Pramod Bhagat, Manoj Sarkar and Palak Kohli just among a few who are likely to make a mark in the 2020 Paralympics.

With a gold in the Men’s Singles Category in the Second Fazza Para Badminton International 2019, Pramod has qualified for the Paralympics next year. Winning the Arjuna Award for the year has come as the icing on the cake.

It’s a special moment for Pramod from small town Odisha who was left with a disability after a polio attack at the age of seven. He is among five para-badminton players to have been shortlisted by the Mission Olympic Cell of the Sports Authority of India ahead of the Tokyo Games. The 29-year-old has creditedGaurav Khanna, Head Coach of the Indian para badminton team for his success.

In an interview to NewzHook shortly after he won the Ireland championship earlier this year, Pramod called Khanna a friend and teacher. “I am very fortunate to have in Coach Khanna someone who is a friend as well as a great teacher. We share a good equation and I can talk to him about anything. He gives me great advice.”

But the news of the award was bittersweet for Pramod as his tweet indicates.

Best moment of my life. I always was dreaming about this but it was very disappointing that my Coach Gaurav Khanna was not considered for the Drona award. No one deserves better than them. I appeal to Honourable Minister Kiren Rijiju to show justice! – Pramod Bhagat, Para badminton player, Team India

The disappointment over Coach Khanna’s exclusion from the list of Dronacharya awardees has been voiced by many. Given the key role he has played in nurturing and guiding Indian para shuttlers and building the team, the failure to recognise him with the outstanding coach award is shocking. In no other sport is India shining as brightly today.

Other shuttlers too have shared their disappointment. Manoj Sarkar, winner of the Arjuna Award in 2018, even called it an injustice. “Its injustice for para sports. We are incomplete Arjuna without our Drona Gaurav sir. Non other coach including able-bodied coaches work as hard as he is doing for us. It was supposed to have been given to him along with me last year”.

Manoj has tagged Minister of State for Sports Kiren Rijiju as well as the Prime Minister’s Office in his tweets.

Khanna, who is currently in Switzerland for the world championship, was not available for comment. Given the consistently brilliant performance being put up by our para shutters, these voices are likely to grow.