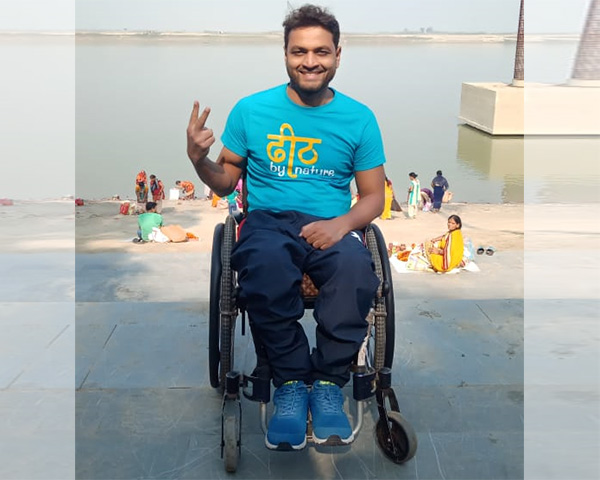 Para swimmer Mohammed Shams Alam Shaikh recently completed the 2 kms open Ganga River Swimming Competition at Patna Law College Ghat. Shams, who is a paraplegic person, has won many laurels and recognitions for his talents. The latest one adds a golden feather to his cap.

Para swimmer Mohammed Shams Alam Shaikh has won many recognitions and awards. Shams, who hails from Bihar, has showcased his talents at numerous platforms. On 8 December, Shams won yet another recognition and added a golden feather to his cap. He completed the 2 kms Open Ganga River Swimming Competition at Patna Law College Ghat. This youngster completed the race in 12 minutes and four seconds. This is the fastest swimming by a paraplegic person. Shams won hearts at the event that was held by the Bihar Swimming Association.

There were over 40 contestants without any disabilities. Shams was the only paraplegic contestant at the event. In the event, he entered the 21st rank which is indeed a special moment for Shams. This youngster swam across the Ganges for a cause.

I want to raise awareness about the need to have a clean and pure Ganga river. Also, we are facing extreme water crisis which is going to get worse in months to come. So I hope officials pay attention and notice all these causes which are of utmost importance. I want to raise awareness and do my bit. I belong to Bihar and Ganges is special to me. The water was extremely cold. It was more like swimming in the famous English Channel which I hope to swim someday.

Shams is aiming high. He hopes to represent India at international platforms. So he ensured to do a video recording of his latest recognition which will be sent to the Asian and Limca Book of Records. In due course of time, Shams plans to send his videos for the Guinness World Records too.

“I thoroughly enjoyed swimming across the Ganges. I already have some events lined up before end of this year”, he says. Shams had recently represented India at the Winter Polish Open Championship and won recognitions there as well. His mentor and guide Rajaram Garg cannot be happier. “I’am glad that Shams is following his heart. I have been training him in swimming for over ten years. I’am sure he will enter the Special Olympics. It is just a matter of time”, he says.